I Visited the Newly Opened Bug's Comics and Games! In the past, a man named Larry AKA Bug had a comic shop. He closed it 20 years ago and became a college professor. However, recently he retired from that job and had the urge to reopen in a new location--but with the same name for his store, Bug's Comics and Games. Tim, who used to be an employee those 20 years ago, joined Larry as co-owner. They found a great spot for the store, acquired some comic and toy collections, got set up to sell new stuff, and that brings us to the present day. Cue the triumphant return of Bug's Comics and Games!

I didn't live in Saint Louis yet when the first iteration of the store existed, but I was excited to visit it now, shortly after it opened in late October. Larry and Tim are great guys and the store is a treat. There is a lovely assortment of back issues and new stuff, there are toys and popular trading card games too. Whether you want to dig through dollar bins or examine the snazzy key books on the wall it is easy to spend some time checking out all the cool stuff. 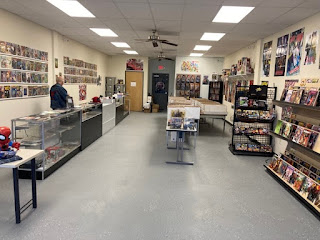 Bug's Comics and Games can be found at 1664 Bryan Road in O'Fallon, Missouri (the zip code is 63368). In other words, it is just a bit outside of Saint Louis county so it wasn't too long a drive for me to visit. You can actually buy stuff from them online as well, so if you're not a local reader of my blog you're in luck should you want to purchase comics and have them shipped to you! The site can be found at this link. Give them a visit in-person or online!