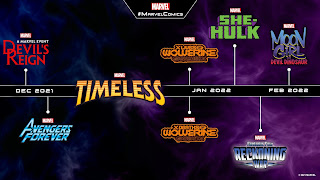 Yesterday was a big day if you like reading comic-books from Marvel. They announced a bunch of new titles and events. There is going to be a Kingpin-focused event called, "Devil's Reign," with the creative team of, "Daredevil," Chip Zdarsky and Marco Checchetto.  We're also getting more, "Avengers," comics from Jason Aaron (yah?) in the form of, "Avengers Forever," with Aaron Kuder on art. There shall be a Kang-centric event titled, "Timeless," which a writer who is quickly becoming a favorite of mine writing it, Jed MacKay (multiple artists are involved). More, "Wolverine," comics would bore me except they are being written by Benjamin Percy and he's been doing a good job on the current, "Wolverine," comic so, "X Lives of Wolverine," and, "X Deaths of Wolverine," might be decent with his scripts and art by Joushua Cassara as well as Federico Vicentini.

I'm not a huge She-Hulk fan, but I did adore Rainbow Rowell's work on the most recent, "Runaways," so seeing she's writing and Roge Antonio is on art has me pretty excited. The, "Reckoning War," Dan Slott has teased in multiple comics for over a decade will be occurring with multiple artists and a currently unannounced team will be bringing, "Moon Girl and Devil Dinosaur," back in February of 2022 when (I assume) the animated show premieres too. Some of these comics are sooner and some are later as the graph shows, but they all sound at least like they'd be entertaining. I don't see anything listed here and go, "Ugh, really? Do we need that?" These are all just creative teams we're seeing though (or not even that in the case of, "Moon Girl and Devil Dinosaur,") so it will remain to be seen how this all turns out. As it is, I'm just glad nothing is a an obviously recycled event like, "Secret Invasion II," or such.

Posted by David Charles Bitterbaum at 9:39 AM