The Jewish Brigade is a Fantastic Piece of Historical Fiction! 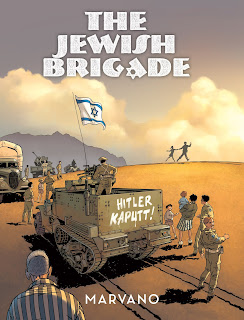 I love history and I love fiction so obviously, I enjoy historical fiction. "The Jewish Brigade," is a new trade paperback published by Dead Reckoning and written as well as illustrated by the single-named creator Marvano. It is a fantastic piece of historical fiction as it takes the very real Jewish Brigade that was formed by the UK in the later years of World War II and proceeds a tell a fictional story of some imaginary members within it.

The Jewish Brigade fought against the Nazis in Italy and also had some members who went around other parts of the nation in search of Nazis who had fled after committing atrocities via the Holocaust so they could hunt them down to answer for their crimes--something one character takes issue with (even if vengeance is deserved, is it morally right) while another feels it is perfectly just. "The Jewish Brigade," faces the horrors of war head-on, touching upon the nightmares of the Nazi death camps, how the formation of Israel was controversial politically and led to its own war, and basically wonders if we can ever truly achieve peace when the human race seems determined to wipe itself out over our differences in race, religion, and so forth. There is an element of hope amongst all the sorrow, and Marvano shows how even if there will always be battles fought in our Nation, there will be those willing to do what is right to help others. 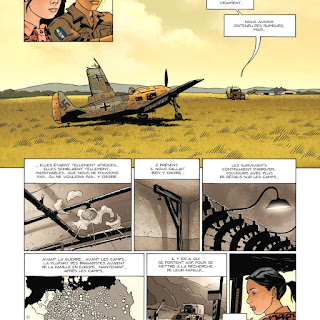 Marvano illustrates everything expertly, not shying away from the ugliest elements of war and laying it all bare for us to witness in its nasty brutality. We need to know what happened during WWII so that it never happens again, and this is made abundantly clear in the text and expert artwork. Marvano also clearly knows his history well the vehicles and weapons of the past are presented expertly with an eye for detail that is remarkable. You really feel like you're looking at an old Jeep or Tank thanks to Marvano's fantastic work.

"The Jewish Brigade," is an insightful read that not only tells a great story, but it also provides a lot of great information about the very real titular Jewish Brigade. The book can at times be a bit depressing--which makes sense as this is WWII we're talking about--but its little glimmers of hope for a better tomorrow are what help make it such a lovely read. Definitely a fantastic book!

Note: A copy of, "The Jewish Brigade," was provided by Dead Reckoning for the purposes of review as I am on their press list.