I Know I'm Late to Discuss this, but the First Issue of, "The Nice House on the Lake," is Amazing! 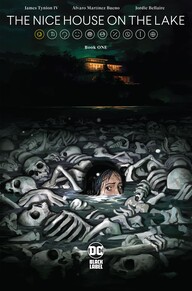 I am behind on reading my comics. I have a big ol' stack of them that I've lately been trying to make a dent in. I finally had a chance to read issue #1 of, "The Nice House on the Lake," and goddamn was that a crazy comic. It starts slowly, as all these people arrive at a beautiful house by a lake, then as the comic nears the end of its debut an utterly insane twist (which I won't ruin so that you too give this comic a chance) is revealed and now I've already been in the process of finding issues #2, #3, and #4 that are out because this book is wild. I should've expected a great comic as James Tynion IV is the writer and he's been on fire with some stellar books lately. Alvaro Martinez Bueno illustrates everything amazingly too. I am so delayed in being amazed by this comic compared to everyone else but this first issue of, "The Nice House on the Lake," helped remind me why I love comics and why I love horror too.

I've revealed as little as possible about the plot on purpose, but I will talk about how surprising it is this book is at DC under its Black Label as opposed to Image or BOOM! Studios where Tynion has his other works. As I understand it, this is a rare example of a new creator-owned book at DC. Long ago, in the early days of the Vertigo imprint (may it rest in peace) DC had that, but then Vertigo quit letting creators own their books and everyone went to Image whilst Vertigo withered away. Tynion has a hit book at three publishers right now, "Something is Killing the Children," is dominating the charts with BOOM!, "The Department of Truth," is a smash with Image, and now we've got, "The Nice House on the Lake," over at DC. Plus, he does self-published work with his Tiny Onion Studios and has a popular Substack. The man is on fire. 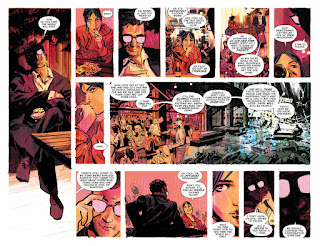 Anyways, I'm sorry I am so late to the party when it comes to singing the praises of, "The Nice House on the Lake." I'll be trying to get the issues that have come out so far post-haste so that I can immediately enjoy them!