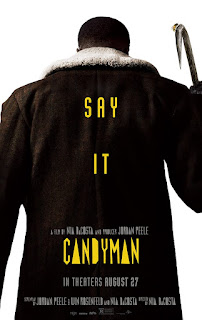 I have vague memories of seeing the first, "Candyman," movie with the stellar Tony Todd (he's back in the new one too). I recall it being terrifying and really good, but as it was a long time ago when I went to see the latest kinda-sequel/kinda-reenvisioning of, "Candyman," it was a bit like I was going in fresh. How was this newest, "Candyman," you ask? Well, it is pretty awesome in the first two acts of its relatively short 1 hour and 30-ish minute runtime. Then in the last 20 minutes it just kind of falls apart, a trend with a lot of modern horror movies.

This movie focuses on the legend of a man who kills you if you say his name five times. When an artist (Yahya Abdul-Mateen II as Anthony McCoy) learns about this terrifying character he finds himself obsessed with the legend of the Candyman, especially as bodies start to pile up as his artistic depictions of him garner more attention. Anthony's girlfriend (Teyonah Parris as Brianna Cartwright) tries to be supportive even as it becomes increasingly clear things are wrong and she has to deal with her own traumas. As Anthony slowly finds his own body starting to fall apart (there is some real body horror elements in this that are gross) things just get crazier and scarier. Then the movie kind of throws its hands in the air and gives up.

"Candyman," is loaded with amazing performances from a fantastic cast and Director Nia DaCosta keeps everything appropriately eerie and moody throughout. Those last 20 minutes though are like eating a delicious multi-layer pie and then after you've gotten through all these amazing flavors you reach the bottom and discover the crust is cardboard--as if the chef just gave-up at the end. I don't want to spoil the ending, but it is basically one of those, "Oh, it turns out ____ was the villain all along despite all logic," type moments. Until then, though, it is really good!

At its brisk runtime, I actually wish, "Candyman," were longer and could have fleshed some of its ideas out more. It touches on so much. It discusses concepts of racism, classism, gentrification, and manages to be scary while also being quite deep about a lot of human and social issues. As I also mentioned, the acting is fantastic with Abdul-Mateen II and Parris both stealing the show. Also, as a big fan of Vanessa Williams, I really wish we could have had more of her (she reprises her 1992-version character). I guess it is both a compliment and an issue that, "Candyman," left me wanting more? More explorations of its themes, more scary moments, and more of an ending than what we got. As it is, "Candyman," a film loaded with potential that it occasionally realizes. I just wish it didn't peter out so bad at the end.