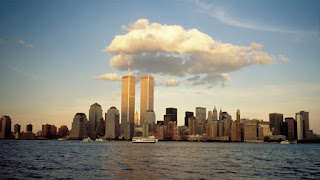 20 years ago today I was in a Junior High English class where we read popular short stories and discussed them. The class ended at 9AM and a teacher came into the room and told our teacher how something had happened at the World Trade Center. There had been a plane accident, or a bomb, or something. It had just happened but it seemed it was being addressed.

We headed into our math class and were getting started with a lesson when it was announced that another plane had hit the other World Trade tower. Clearly, this was no accident and America was under attack. After that, we didn't really do any of our classes the rest of the day, instead, any televisions in the classrooms were broadcasting the news about what was happening as we all tried to make sense of it. The news came in about the Pentagon as well as a crash in Pennsylvania. I was just dumbstruck by it all and the true gravity of what had happened didn't really hit me until the next day as the deaths were continuously being tallied up and the faces of those killed or still missing filled our screens. It made me feel sick.

There was of course a surge in patriotism and unity, people these days still say they miss how wonderful it was on 9/12 that everyone came together. This of course is using rose-tinted glasses as plenty of people were not included in the loving embrace of nationalism, with Muslim individuals still facing persecution in the U.S. to this day. There was some sense of hope that we were going to go to Afghanistan and get revenge. Then for some reason, the war started to encompass Iraq for no (truthful) reason.

Eventually, we killed the mastermind behind 9/11, Osama Bin Laden, but we still found ourselves wrapped up in Afghanistan until recently when we essentially abandoned it back to the Taliban, fleeing a country that any other government has consistently failed to adequately, "Help," such as previously in 1919 (the British gave up), 1989 (The Soviets gave up) and now in 2021 (we gave up). The failure in Afghanistan does not have a sole President to blame as much as those of us who hate Trump (or others who like to throw shade at Biden) would like. This mess encompasses Bush, Obama, Trump, and Biden, with everyone taking some blame, although I'd say Bush deserves most of the scorn for the attacks even happening and Obama gets out with the least of this stink upon him. We didn't know everything that would be to come 20 years ago today though. We were just hurting, so badly, as a Nation. In some ways, the surge of patriotism and jingoism wasn't a surprise even if some of it is incredibly cringe-inducing today.

Now we have children learning about 9/11 in history classes as something that happened before they were born. It must be weird for them to hear about this major event that for them seems so distant yet for many of us feels so fresh in our minds--the only other comparison I can really make when it comes to a National tragedy is much older Americans who recall Pearl Harbor or when JFK was killed. I remember that day though, 20 years ago. I couldn't have predicted all it would have led to and 20 years out we sure do have a lot more clarity and understanding than we did before, for better or worse. I wish 9/11 hadn't happened, that it could have been stopped, and that our World could be a lot different (I would hope in a better way) than it is when it comes to the global politics of having a, "War on terror," or such. It all did happen though (despite what conspiracy theorists might tell you) and the best thing we can do on this day is look back and remember.