The First Appearance Debate Has Reignited with a Moon Knight Comic 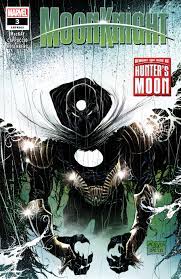 Everyone loves to argue about what is a, "First appearance," in comic books. Some people claim that if a character only pops up briefly, isn't named, is in shadows, or so forth then it is a, "Cameo," appearance. The first full appearance then comes later. People get really heated over this subject. I've seen folks almost come to blows over whether, "Avengers," #195 or #196 is the first true Taskmaster; "Amazing Spider-Man," #299 and #300 with Venom inspires debate too. Oh, and don't get me started on Wolverine and which issue of, "Incredible Hulk," truly counts depending on if you're going more by his first cover on #181 or how he appears in the last panel of #180 and outright says his name. Sometimes a, "First appearance," is a lot less cut-and-dry than you'd think. Now the latest run of, "Moon Knight," has led to debate anew.

In the first issue of, "Moon Knight," he meets a Dr. Badr and we see at the end of the issue Dr. Badr putting on his Hunters Moon mask. He isn't in the full outfit, however. Then, he's on the cover of issue #3 and spends much of that issue (which came out this week) in his full costume fighting Moon Knight. Does this mean #1 is a cameo and #3 is first full? Is #1 a first full and #3 is the first cover? Everyone is debating it online and it has been discussed over at the awesome Comics Heating Up Forums which I would recommend checking out (I'm quite active there, myself). In my own opinion that has no actual foundation besides it, "Feels," right, I'd say Dr. Badr/Hunter's Moon has his first full appearance in issue #1 but then has his first full cover for issue #3. I do not think #1 is a mere cameo as we hear his regular name as well as villainous title, plus we see him with the mask. Observe: 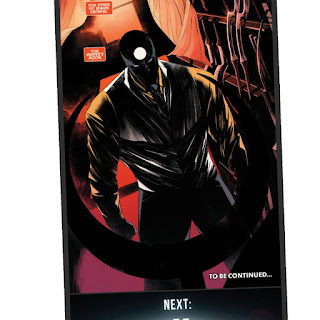 I think that's a pretty established first appearance, but feel free to disagree if you want. Part of the fun is seeing everyone debate!

Posted by David Charles Bitterbaum at 11:23 AM