"Tech Boy," is a Fun Comic by a Young Local Author 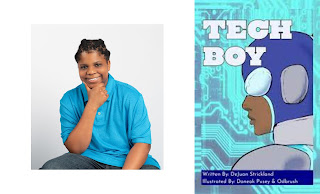 A friend and fan of my blog recently told me how they saw in a Facebook group a mother talking about her sons' self-published comic. I love writing about local authors and supporting young creators so I reached out to the family and learned about "Tech Boy," by DeJuan Strickland, or DJ. DJ is a 13-year-old scholar who is born and raised in St. Louis, Missouri. He enjoys gaming, anime, reading, and indulging in comic books. He is a member of STEMSTL Strategic Youth Advisory Board. He is a long-time honor roll student who thoroughly enjoys science and technology. I was able to interact with him and his mother about his comic and learned how it came about.

DJ first came up with the idea of Tech Boy after watching the movie Black Panther. He went back to his friends house and felt inspired to write his own comic book. He said he felt “seen” after the movie and realized there aren’t many  Black protagonists in books. He included his love for technology after taking a few coding classes at the Microsoft center through the Color Coded Kids program. They taught him coding and he's created a video game before too! "Tech Boy," was self published in April of this year and it became a #1 bestseller in children’s graphic novels section on Amazon.  DJ and his Mom told me the mission for, "Tech Boy," is to inspire other youth to become tech-savvy entrepreneurs. 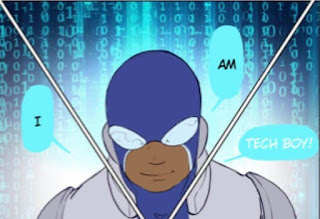 As for what, "Tech Boy," is about, it features the journey of Tyriq Summerbird, a teenager from Cyber City, MO who gains powers through technology. His newfound adversary, Titan Ray, attempts to demolish the city for unknown reasons. This prompts Tyriq to debut as Tech Boy while attempting to use his powers to stop Titan Ray. Tech Boy strives to encourage youth by showing them the power of STEM (Science, Technology, Engineering and Math).

Having read this first issue of, "Tech Boy," I found it very fun! The story has shades of Superman's origin story mixed with more tech-focused heroes such as Green Arrow (with his high-tech gear) or Cyborg (with how his own physical body syncs with technology). There also is some fun mech-fighting as Titan Ray is a massive robot who is trying to wreck the city and I love anything with huge robots or kaiju. At just 13 DJ already has written something impressive and exciting so I look forward to what he makes next! 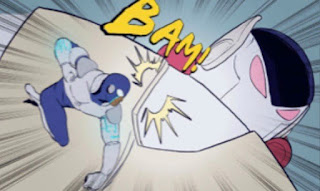 As I mentioned, DJ is the writer with art by Doneak Pusey and Obbrush. The artwork is solid and portrays the action in the tale quite well. I would encourage everyone to check out the website for, "Tech Boy," or grab themselves a physical/digital copy on Amazon.