Everyone, You Do NOT Force Andre 3000 to Comment on Your Petty Rap Feuds 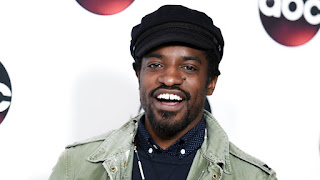 Andre 3000 is half of my favorite music group ever, OutKast. OutKast released their last album as a group in 2006, but both Big Boi and Andre 3000 have gone on to be involved in a variety of other projects. Sometimes Andre 3000 is so kind as to provide a stellar guest-verse or two on someone's song. It seems he was going to do that for Kanye West's latest LP, "Donda," but for various reasons, it was decided not to use his rap. That sounds simple, but because Kanye West and the person he is currently feuding with--Drake--can't help but act like children, Andre 3000 inadvertently has been drawn into the whole mess.

I basically avoid talking about Kanye on my blog now and kind of pretend the Kanye I knew and loved the music of disappeared after, "The Life of Pablo," because in many ways, he kind of did. The utterly egomaniacal mess of a man West has turned into is unrecognizable from the one who gave us, "The College Dropout," and one thing this new Kanye seems to need to basically survive is to be in a conflict with someone else. Right now, that, "Someone else," is Drake. I've written about my concerns with Drake a number of times and have never been an especially big fan, so when it comes to these two men slinging insults at each other I don't give a rat's ass who, "Wins." That said, these two trifling fools had to involve a man I do still respect and adore the music of, and that is some bullshit. 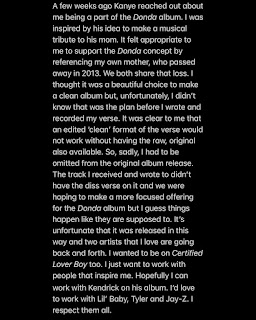 Drake was on a satellite radio show and played a clip of a Kanye song that had Andre 3000's verse. It was kind of a, "Look how crazy Kanye is, he cut Andre 3000 from a song!" kind of flex. I understand Drake being mad as his private info was doxxed by Kanye--again, this whole feud between the two is dumb. Andre 3000 getting dragged into this mess prompted him to release a short and sweet statement that can be seen above. Yep, Andre 3000 acts like the only adult in the room and says he's happy to make music with any and all of the artists he respects. Andre 300 sees this dumb fight and wants no part of it, thanks. Andre 3000 is far too talented, respected, and mature for this shit, leave him out of it, you two.