The True End of an Era: Family Video is Shutting Down 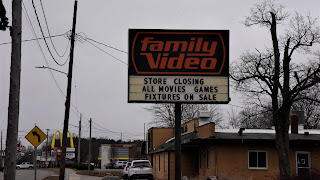 Hollywood Video ceased operations. Blockbuster called it quits except for a single store. Still, Family Video kept going and seemed to be doing alright. COVID-19 basically delivered a killing blow to the last large rental franchise in existence. There are still some small Mom and Pop rental stores or specialty ones that appeal to a mixture of nostalgia as well as carrying stuff that isn't easily streamable (obscure foreign flicks, for instance), but the only big dog left has declared it's done.

You can still rent movies or games at certain places. Netflix does have a physical option, Redbox refuses to die, and Vintage Stock stores buy and sell basically everything and do actually let you rent stuff--few realize that. It really is the end of the big video rental store era, an era that had been past its prime for a while but was still trying its hardest. As someone with a fondness for old VHS tapes and DVDs, I am a bit sad. The unforgiving march of time and advances in technology just made a big rental chain no longer viable.

Posted by David Charles Bitterbaum at 10:39 AM