Rant-Reviews: Checking-In On Some Series

Seeing How Things Are Going

There are certain comics that are deep into their series, others that are wrapping up, and some that are still in the early stages. They are all past their first issue, however, and worth checking-in on to see how they are going so far (or ending, when applicable). 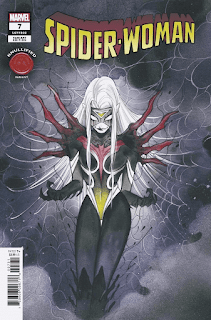 Jessica Drew/Spider-Woman's latest series has seen her doing a bit of globe (and space)-trotting in an effort to fix how she is dying. A cure she was given as a child for her weird Spider-mutations has stopped working and now she has to fix it by working with an estranged brother and weird clone-thing of her Mother (it's complicated). That all gets interrupted this issue, however, as the, "King in Black," event Marvel is doing results in Jessica having to fight one of those big symbiote dragons with some assistance from Carol Danvers/Captain Marvel, Luke Cage/Power Man, Danny Rand/Power Fist, Clint Barton/Hawkeye, and one of the versions of the Night Nurse.

The comic even acknowledges subtly that this cross-over is interrupting its main focus--Jessica wanting to find a way to not die--but does keep that plot going by having her inject herself with a chemical that is keeping her alive but also kinda killing her so she can fight the symbiote. There's nothing that impressive or terrible in this comic, it just feels a bit like some forced crossover filler. I didn't feel my time was wasted or especially well-utilized reading it. 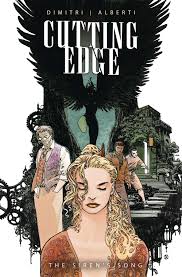 An English adaptation of an Italian comic written by Francesco Dimitri with gorgeous artwork by Mario Alberti, this mini-series has focused on a group of very different people gathered by a mega-corporation for a strange, "Game," that has a lot more interesting weird stuff going on than one would first expect. Between mythical creatures, mind-altering hypnosis, and a lot of lethal threats, this comic expertly mixes genres with its blend of mystery, light fantastical elements, and as I said, the art is amazing. The next issue changes the series title and adds a #1 again, I think, but it is all part of one big mini-series. Definitely worth a read. 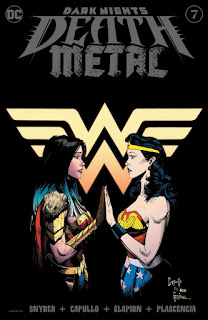 Okay...what was the point of all this? The entirety of, "Death Metal," was a confusing mess that sometimes had fun moments, but as a whole made almost no sense. It is finally over and has rebooted (excuse me, refreshed), the DC Universe in a whole new way. Still, this whole event was a bit of a mess that feels like it took forever to get to the new Omniverse/Infinite Frontier/whatever we're calling it. 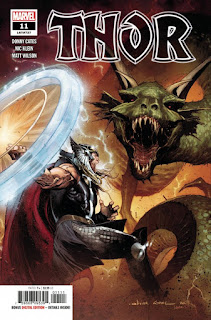 Donny Cates' take on, "Thor," started-out with some epic space-fighting between Thor, Galactus, and a new baddie named Black Winter. This next arc, however, has had a lot more of a scaled-down horror-vibe, and I'm digging it! Thor traded places with his alter-ego Donald Blake, but didn't realize while Blake had been gone for a while he'd gone utterly mad and gained a lot of deadly power.

Now Blake's running loose with plans to kill a whole lot of people (which artist Nic Klien masterfully portrays) whilst Thor is stuck in a netherworld of sorts. Blake isn't totally evil, however, as we witness in this issue, but he clearly is a major threat and a scary one at that. Oh, and the last page is hilarious in a wonky way where he plans to fight (spoiler alert) the frog-Thor from comics of past. 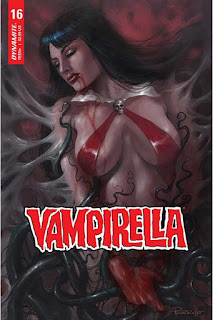 I always say how even if I don't normally care about a character, Christopher Priest writing a comic about them makes me interested. That's been the case as he continues to give us a twisty-and-turny tale with Vampi that takes all of her old comic history and instead of forgetting it, actually builds-upon the confusing continuity in clever ways. With as complex a family and history as Vampirella has that gives Priest a lot to work with, and he's a writer who always excels as multilayered yarns. Fantastic stuff.