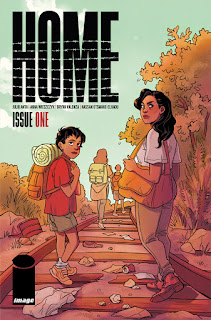 Superman is an illegal alien in America. The comics have commented on this now and then, pointing out how the fact he's lily-white and handsome probably helps to make him seem less like an, "Other," to many Americans. Still, what if someone who wasn't, "Wanted," happened to try and gain asylum in America and then manifested powers? It would make for a clever mix of politics and superpowers we will be getting in, "Home."

Written by Julio Anta (who is himself the child of immigrants to America) with art by Anna Wieszczyk, "Home," is about, "...a young boy who is torn away from his mother while seeking asylum at the U.S. border, just as something begins to change in him. He doesn't know it yet, but it's the onset of superhuman abilities that will change his life forever. The press release for the comic continues, "It's not often that a comic is so direct about asylum seekers at the US-Mexican border these days." I could picture this being a pretty fascinating read, and I'll be checking out this five-issue mini-series when it launches in April with great eagerness.