Rant-Reviews: All Stuff I Liked

Sometimes I have reviews focused on a specific theme. I guess the best kind of one I would have today is that I liked all of the books I'm about to share reviews of. That's kind of a spoiler, but perhaps you should still read on to see how much I liked the assorted comics.

The Comics I Enjoyed 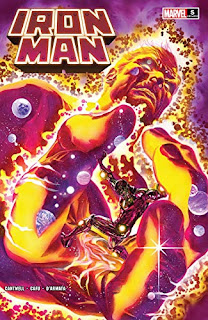 Christopher Cantwell's writing and Cafu's artwork have been knocking it out of the park on this series. It's got humor (Tony Stark recruits some oft-ignored heroes to help him with a secretive rescue job), has the criminally underused Pasty Walker AKA Hellcat in a major role, and it keeps me guessing where it is going next as Iron Man faces off against a now-android Korvac who wants to regain God-like power as he had in the past. Tony Stark solo titles sometimes struggle with him coming off as an arrogant jerk (it took an actor like Robert Downey Jr. to soften the edges for film without a doubt), but Cantwell has balanced the snark with the humanity quite well. Cafu's artwork works fantastically for this title as well as he gives everything a nice professional sheen--perfect for a man with a robotic suit of armor. It's just a great series so far! 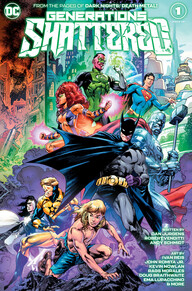 DC's heroes from all kinds of timestreams come together to fight a mysterious threat that is eating-up all the Universes. No, it's not another, "Crisis," event, which one character even acknowledges, it is this, "Generations," mini-series that seems like it should be a mess but actually kind of works. Artists change every few pages, but it's okay because we're jumping to various timestreams and Universes--making sudden change less jarring. Seeing a Batman from 1939 interacting with a Steel from the 90's and characters from the future has a nice quirky charm and the comic takes these messy ideas and a smorgasbord of artists to combine them into something weirdly effective. Worth a read. 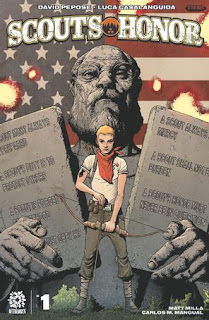 The apocalypse happened and one big group of the last survivors have lasted so long...following a, "Ranger Scouts," manual that seems like a Boy Scouts-styled guidebook. It sounds darkly hilarious, but this comic by David Pepose and Luca Casalanguida plays everything straight. That choice works well as the comic manages to introduce some clever commentary on gender roles as well as giving us a last-page twist that reframes where the rest of the series will be going in a crafty manner. An impressive debut issue. 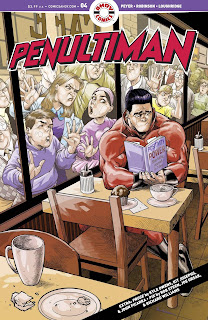 Penultiman #4
I absolutely adored the first issue of, "Penutliman," and founds its interpretation of a self-hating superhero to be both hilarious and thoughtful. The artwork by Alan Robinson continues to amaze with his nice clean and clear lines working perfectly for this Superpowered man who feels the opposite of super and Tom Peyer's writing avoids coming off too depressing or as if he's making fun of the inner turmoil Penultiman feels. I can't wait for the upcoming final issue that seems to be exploring how Penultiman's biggest threat may end up being his closest ally.
5 out of 5 stars. 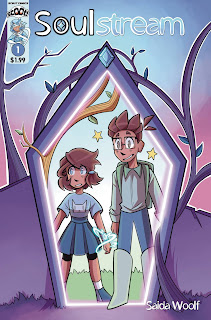 Saida Woolf writes, draws, colors, and basically does it all for this first issue of, "Soulstream." It won't be getting a second issue, exactly, because it is part of publisher Scout's, "Nonstop," plan where they release a first issue of a comic, and then after people get a taste they put out a full graphic novel of the story. It's a clever idea Scout's been doing and considering how fun this teaser of sorts for, "Soulstream," was I imagine many folk will want to get the TPB! "Soulstream," follows a sibling duo as one gets powered-up with some magic and they need to defend multiple realms from some shadowy forces. The plot is a bit straightforward sounding, but the humorous writing and charming artwork of Woolf elevate what you'd expect to be a standard story into something quite lovely. I'd recommend giving this first issue a look or simply picking-up the trade paperback when it comes out!