Flashback Friday: "Swordfish," Was a Fun Movie, Regardless What Haters Say 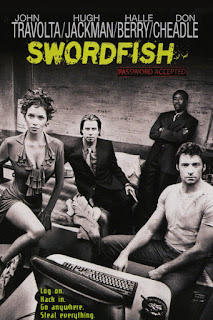 You ever remember a movie not because of the plot but because of how great the actors in it were acting-out a story that admittedly was a mess? That's me with, "Swordfish." The, "Story," as it were involves an old government slush fund that a crazy guy (John Travolta) needs a skilled hacker (Hugh Jackman) to break into, yet at some point they also go and hold-up a bank, as we see when the movie opens 3/4th into the flick, before flashing back to the beginning, and then building-up to the 3/4th spot and jumping into the last fourth. Yeah, "Memento," thought it was clever going in reverse? This movie jumps all around in time! Plus, there is Halle Berry as Travolta's parter-in-crime as well as life--and we see her boobs! Halle Berry's boobs in a movie not as depressing as, "Monter's Ball," are always a welcome addition. Seriously, "Monster's Ball," is the second most depressing movie ever with, "Monster," in the title--the winner is simply, "Monster," with Charlize Theron, in case you wondered. Oh, Don Cheadle is an FBI agent in this too, and he's always a treat on the screen.

"Swordfish," has a plot that makes almost no sense, but it is loaded with action, has Travolta doing his usual over-the-top thing with weird monologues about movies that wouldn't be out of place in a Tartino flick, a pre-Wolverine Hugh Jackman being delightfully understated, it is fun! Oh, and there is a bus that gets carried by a helicopter whilst loaded with people from the bank who are equipped with explosives that cause them to blow-up if they get too far from the bus because this movie literally has everything except coherence. Keep in mind this is 2001 when, "Swordfish," came out too, so you know all the stuff dealing with hacking and, "Cyberspace," is really silly and unrealistic because people in 2021 still don't understand hacking and two decades ago it was really foreign to folks!

Based on my post's title you already know that, "Swordfish," has bad reviews. Terrible, reviews, frankly. It sits at a wretched 25% on Rotten Tomatoes and people who rent or stream it years later still feel an urge to post negative reviews on websites these days. Forget the haters, though, this movie is awesome if you come into it expecting a spectacle and are willing to not think too hard about the plot. I loved this movie so much I've watched it with all the commentaries with the cast who could best be described as, "Vaguely bemused, mostly bored," when offering their thoughts. I have viewed the many alternate endings that change little about the actual flick. I am all-in on, "Swordfish," damnit, and I still couldn't explain the plot to you without seeming like that meme of Charlie Day from, "It's Always Sunny in Philadelphia," where he looks crazy trying to break-down a conspiracy.

"Swordfish," is not necessarily a good movie, but it is a fun one. Between the great cast, special effects, and general weirdness of the movie jumping-around in time in a manner to seem clever even if it only confuses us more, I love this flick. It is very dumb, yes, but sometimes we just need something entertainingly stupid in our lives.