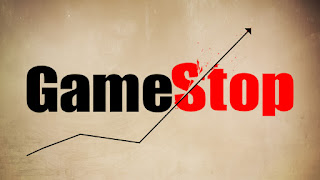 Remember GameStop? The video-game store where if you didn't preorder a hot new game they most likely didn't have a copy for sale even though the Target down the street had tons of copies, because that store realized people want to sometimes just buy games instead of putting down $5-$10 as if it were a car? Yeah, GameStop, which takes your trade-in games and gives you a tiny amount of store credit to spend on all the random pop-culture junk they started carrying after just doing games stopped bringing in much money? Well, their stock was trending at under $5 some months ago and now in the span of some days is at *checks notes* $300 or so. Why? Because people made buying stocks a meme, basically.

This article from Kotaku helps to break-down what is going on pretty well. To attempt to summarize, people started buying GameStop stock thinking it was undervalued. Companies that try to, "Short," stocks invested hoping the stock would drop. People on Reddit saw this and wanted to screw-over Hedge funds for a laugh and with the help of apps that let everyday people buy stocks, like Robinhood, folk kept buying GameStop shares and pissed Wall Street off because this was market manipulation that didn't benefit Wall Street--when the hedge funds can manipulate the market to get a profit (just remember those who bet on a housing collapse in the 2000s) they don't get mad though. Buying GameStop shares to screw-over investors with deep pockets who like shorting stocks is the new fun meme that people are, "Doing for the lulz." If anything proves the Stock Market is basically a shell game that doesn't actually represent the health of the economy, this is it. A bunch of people teamed-up to screw with a single stock for fun and it has caused mayhem.