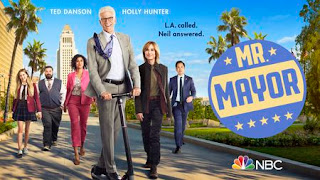 My wife and I were able to watch the first two episodes of, "Mr. Mayor," last Thursday. Starring Ted Danson as a man in way over his head upon becoming the mayor of Los Angeles, it was pretty funny. I think a lot of the credit for it being so good belongs with Ted Danson. Between, "Cheers," "The Good Place," and a number of other projects the man has been acting for decades in comedic roles and excels at them. The supporting cast is good too, with Holly Hunter being almost too over the top as the deputy mayor, but it works. Everyone is great, it's a good cast.

There are puns, weird little jokes, and it all flows smoothly--the whole show is just nice and chill. Now, there isn't too much bite to the humor, which is odd as this is coming from a lot of the folk who brought us, "30 Rock," production-wise, which for all its zany jokes could sometimes really hit hard. Still, "Mr. Mayor," seems to be off to a good start and lots of comedies usually need a bit to find their footing (the just-mentioned, "30 Rock," had a really weak pilot). Samii and I plan to keep tuning in and getting some good laughs.