Flashback Friday: "Grayson," #3 is a Comic That Has Stuck With me For Years 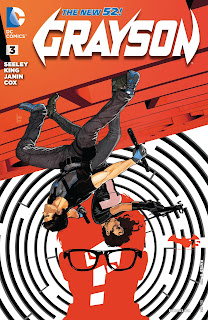 You ever read a comic that weirdly sticks with you? That's me and, "Grayson," #3. Back in 2014 Dick Grayson/Nightwing faked his death and went undercover at Batman's behest to infiltrate an evil spy organization known as, "Spyral." He had to pretend he was a bad guy in an effort to take down this group that threatened the safety of the World. The series was written by Tim Seely and a then-new-to-comics Tom King. 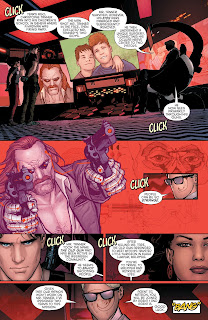 King now is quite popular doing his own solo writing and Seely continues to make great stuff too, so those two working together on this series in retrospect now that Seely is still great and King is even more known this book was already a slam-dunk of quality. Issue #3 has Mikel Janin on art and they do a stellar job too, with a lot of credit for what would have been an absurd premise but coming-off touching working thanks to their illustrative work. What exactly made this comic stay in my mind, however? At its heart, it is about a parent's love for their child. And cybernetic eyes. Stay with me here. 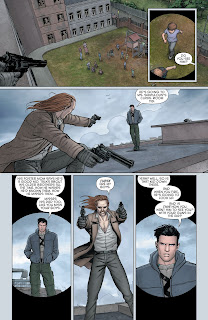 Years ago a man named Christophe Tanner was shot in the face at his children's school but survived. He underwent surgery that connected his ocular nerve to two pistols. It has made him one the best assassins around as he literally can, "See," through his guns. He steals two superpowered eyes from someone he killed and is apparently planning to get them put into his head--according to Grayson's spy agency. They want those eyes and to stop Tanner (who also goes by, "The Old Gun,") from possibly becoming even more powerful with two sets of eyes that he can see out of his head and guns with. It sounds absurd, and it kind of is, with the comic playing-up how silly a man who sees through his guns sounding. Then the book takes a swerve into some depressingly touching territory. 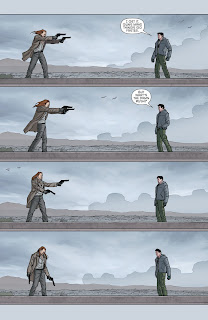 Grayson figures out that while it was thought Tanner's children were dead, they aren't. They are living with foster parents and miss their Dad who went missing after the day after he got shot and then had the operation to become a super-assassin. He wants to, "See," his kids again, and not through guns, the things he uses to kill so many people. He wants to be able to see them with real eyes. Grayson confronts Tanner on a rooftop near the school and Tanner admits he recently discovered the eyes won't even work with his new enhancements, making them useless anyway. Then Grayson's partner shoots Tanner and kills him even though things seemed like they could have a nonviolent resolution. Before he dies, Tanner shoots her back and they both lay on the ground outside the school, alarming everyone. A silly villain who sees through his guns is turned into something really tragic. 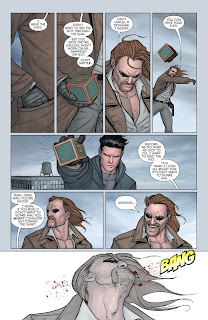 This issue struck me the first time I read the comic in 2014 and I felt it even more after I had my own child. Imagine if the only way to, "See," someone you love more than the World itself was through a method of destruction? That would be terrifying and cause you to be disgusted with yourself. I couldn't imagine not being able to be in my child's life whether it is for a realistic reason or something far-fetched like gun-eyes. By taking an absurd idea and introducing an all too human aspect to it, the third issue of, "Grayson," left an imprint on me. The rest of the series was solid as well, but that third issue, it just weirdly hit me hard and then had even more impact once I had Clarkson. It's one of my favorite single issues of a comic ever, frankly. It's just that good.