Many People are Very Excited for the, "Star Wars: The High Republic," Comic Today 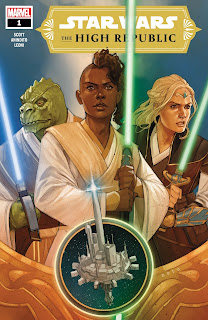 I am a casual, "Star Wars," fan. I've seen a chunk of the movies, played some video-games set in the Universe, read a handful of comics, watched a bit of, "The Mandalorian," and so forth. I am not super-knowledgeable by any means. That said, many of my friends who are big fans of, "Star Wars," and its assorted properties are quite excited for the first issue of, "Star Wars: The High Republic," which comes out today. It follows some of the earliest history of the Star Wars-continuity, as I understand it, and many issues have been sold to comic stores with there still being a ton of unmet demand. I believe there is also a novel folk are pumped about and the comic goes with it--maybe? I'll pick up an issue if I can find one and give it a read as I always like trying out first issues of stuff.