DC Comics Has a, "Refresh," on the Way 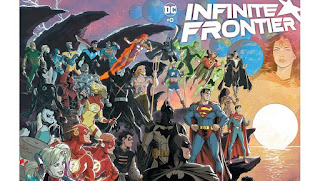 The word, "Reboot," is apparently a dirty one this time, so DC announced today with The Hollywood Reporter they have a big, "Refresh," coming to their books. After, "Death Metal," finally wraps-up we get a two-month event in the form of, "Future State," which is honestly kind of filler but looks really fun nonetheless. After that, we kick off a new era in the form of the, "Infinite Frontier." There will be a variety of relaunched comics that are now solicited as a part of this and some look pretty cool (no Aquaman solo book, which is sad as he is a good character when written well). Is this a good jumping-on point for new or lapsed readers? A great time to quit DC? Just a soft relaunch that will boost sales a bit but then settle into a sense of normalcy? There is no way to know, but I am sure that I'd read the Hell out of a, "Swamp Thing," comic by Ram V, so there's one comic I'm excited for.