Tom Cruise Yelled at People for Not Following COVID-19 Rules, As He Should Have 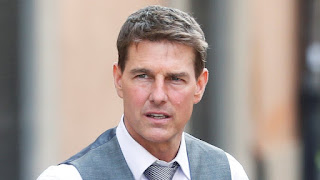 Let's get one thing out of the way: I don't really like Tom Cruise. He's a decent enough actor when he's given roles that let him lean-in to the idea he's a smarmy jerk (Edge of Tomorrow) or when he's put under enough prosthetics and makeup (and acts really over the top) so that you don't realize it's him (Tropic Thunder). That said, he's a member of a, "Religion," called Scientology that seems designed to scam its members out of money even faster than most other religions and which--lest we forget--tried to infiltrate the United States Government in the 1970s. He also is just an apparently unpleasant person, full of himself, and so forth. That's why I find myself extremely surprised to at this moment agree with Tom Cruise about something and disagreeing with those who think he was too harsh or overreacted in a situation.

Basically, Tom Cruise saw members of the crew for his movie, "Mission Impossible 7," not following COVID-19 protocol and tore into them. He told them it was dangerous, put everyone's jobs at stake, and if it happened again they were fired. Some people think Cruise was too harsh, but I think he reacted the correct way--he made it clear to those not being safe how much of a jackass they were. With millions of cases Worldwide and a death toll that just keeps climbing, the time for niceties with COVID-19 is long past. Politely asking people to wear a mask and social distance did little as they refused and spouted conspiracy theories or political opinions about doing the bare minimum to keep themselves and others safe. Everything Cruise said about unsafe behavior putting health and livelihoods at risk was 100% true. I'm as surprised as anyone I'm saying, "Tom Cruise was right...in this one situation," but I am.