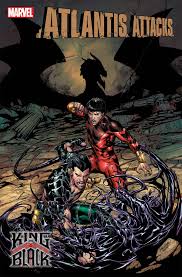 Remember back in September when I noticed how the delayed mini-series, "Atlantis Attacks," was going to have a surprise crossover with the then-upcoming, "King in Black," event? It got me thinking about surprise crossovers, but it should've had me considering crossovers that aren't really much of a crossover. That is because while the fifth issue of, "Atlantis Attacks," is a good read, it really isn't a tie-in with King in Black. It literally is not until the last page the event is mentioned, and then there is a little blurb saying to read the actual crossover of, "Namor: King in Black," which kinda-sorta follows-up from this mini-series.

I get that maybe Marvel wanted some more sales of, "Atlantis Attacks," and hoped that by making the final issue tie-in with this, "King in Black," event it would get people who are really big on Knull (like Marvel), to pick up the comic even if they hadn't read other issues. I think it was a tacky ploy that somewhat diminishes the ability of, "Atlantis Attacks," to stand alone as a quality mini-series without suddenly inserting--as I said--a single page, to ostensibly make this a tie-in. The whole thing reeks of cynicism, which stinks as I already said, "Atlantis Attacks," was a fun comic. Hopefully, "Namor: King in Black," will be good along with its actually tying in with, "King in Black."