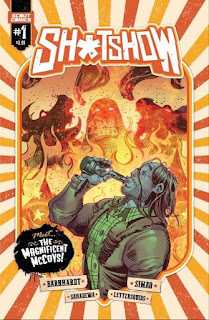 I was contacted the other day by Adam Barnhardt, who is the writer and creator of a new comic coming out this month. Published by SCOUT Comics, it is titled, "SH*TSHOW," and I had the opportunity to read the first issue that Barnhardt kindly provided. Between Barnhardt's writing and the art by  Samir Simao, I quite liked, "SH*TSHOW," and look forward to future issues!

The comic takes place a number of years after a World of heroes like you would find in mainstream comics has come to a sudden and violent end. A devil-creature came and basically destroyed all the heroes, with only a few escaping and some being born since. Earth is now not a post-apocalyptic wasteland so much as aimless and dull after the end of a bright and shining era of superpowers and all the excitement superbeings brought our lives. Now the few who do still have powers eke out a living as part of a traveling circus that does their once-impressive feats as little more than shows for a bored and depressed public. This may sound incredibly depressing, but, "SH*TSHOW," is actually pretty comedic--albeit in a dark way. 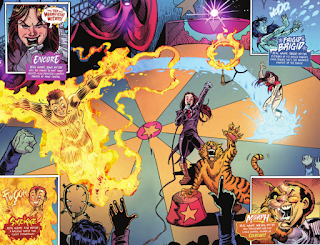 The most powerful being of all was once known as, "The Legend," but now just goes by Richard McCoy and is significantly less powerful enough that he can drink a lot of liquor and take a lot of drugs in order to at least feel something. He is still part of the traveling circus, however, and they care for him the best they can between shows with them showing off fire, ice, transforming, and other powers that remind the public of a time that once was. At the end of the issue, however, it seems the evil that almost wiped all the heroes out before might be coming back, so trouble is without a doubt on the horizon.

I enjoyed the bleak-but-funny humor in, "SH*TSHOW," and it reminded me--in a good way--of the comic, "Black Hammer." Both deal with heroes who are literally or figuratively removed from much of the rest of the World and hold nostalgia for the past that can never be reclaimed. While, "Black Hammer," is often more serious, however, "SH*TSHOW," gets some good laughs out of the reader along with making us feel a little sorry for the heroes who got left behind after their time essentially ended. I had a lot of fun reading this first issue of, "SH*TSHOW," and would encourage you to ask your preferred comic retailer to order you a copy before it comes out this month!