"Crysis," on the Nintendo Switch Works Well For The Technology It's Running On 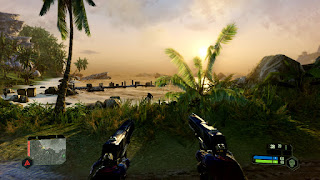 For years if someone had a new fancy computer the question was, "Can it run Crysis?" A fun game in its own right, but sometimes treated as if it were more of a tech demo, "Crysis," took a lot of juice to pump-up to the best graphics possible. It came out in 2007 for the PC and with a recent remastered version still can hog your computer's processing and graphics like nobody's business if you want it pretty as possible. Meanwhile, the Nintendo Switch is a mighty little console, but by no means as powerful as even last-gen consoles such as the PS4 and Xbox One. That made everyone a little surprised that a version of, "Crysis," would be released on the console. Could it even run well? Would it look butt-ugly? I was able to buy a digital download recently when it was on sale (I love me a good sale) and I'd say that, "Crysis," does indeed work on the Switch, as long as you have reasonable expectations.

"Crysis," on the Switch isn't gorgeous, but it has solid graphics. The destructible environments are there, the driveable cars, the enemies for you to stealth around or try and toss. The open-world levels at the beginning of the game that give-way to annoyingly on-rails fights are present. This is without a doubt, "Crysis," and you can play it in the palms of your hands--that's pretty cool! Yes, it can stutter and skip during scenes of intense combat. I also did have it crash on me a couple times. That said, it works well enough for the kind of tech it's running on. It is still, "Crysis," with all its fun and annoying elements. If you've ever wanted to play, "Crysis," on the go, this is your best bet. Should you want top-of-the-line graphics and effects, however, you're gonna be disappointed. As I said, come in with reasonable expectations and you'll be pleased. I had fun, myself, hence wanting to write this little review.

4 out of 5 stars (in terms of satisfaction playing on the Switch).

Posted by David Charles Bitterbaum at 10:45 AM