In Case You Wondered What Dan DiDio Was Up To During the Pandemic... 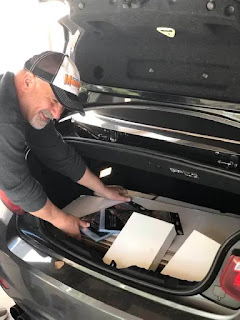 Dan DiDio was suddenly fired from his position as Co-Publisher at DC Comics when a number of powerful people wanted him gone (WB's executive board, maybe, we don't know for sure). I wrote about it and how eventually some facts would come out or Dan DiDio would find himself at another company. Nothing juicy has come to light yet, but since DiDio's firing, a lot has happened. DiDio maybe was not liked by a number of people, but he got DC through a number of crises (no pun intended with all the, "Crisis," comics they publish) and maybe, just maybe, some people at DC wish he were there right now as everything in the comic-book market is an utter mess due to COVID-19. Diamond has stopped shipping product for an unspecified period of time, DC's printer is shut down for a number of weeks as well, and what is Dan DiDio doing while all this happens? He's buying comic supplies.

Yep, Dan DiDio posted on his social media and Bleeding Cool reported about it how he kinda-sorta broke the law and went out while California is locked down in order to buy some comic supplies from an unnamed comic store. It went down with the owner of the store meeting him in a parking lot and popping their trunk to reveal the goods as if it were an illicit drug deal. After sampling the merchandise as the picture at the top of my article shows, the transaction was complete as DiDio was pleased with his purchase of bags and boards. DanDio seems happy and safe, so I'm happy for him.
Posted by David Charles Bitterbaum at 11:50 AM