"The Stringbags," is Another Great Garth Ennis Tale of War 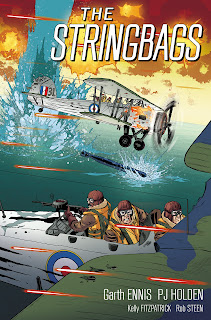 If you needed to think of a comic-book writer who probably knows the most about war--its technology, its events, all of that, you would most likely be thinking of Garth Ennis. He's done some solid super-hero comics as well as comics that outright takedown super-heroes, but his passion seems to be in writing comics focused on war. Ennis manages to write tales that are exciting without glorifying combat, and if you needed anyone who makes comics to give the intricate details of the most random battle or weapons used in it, Ennis would be your go-to person. That is why I was excited to receive a preview copy of, "The Stringbags," from Dead Reckoning.

Dead Reckoning is the graphic-novel focused imprint of the Naval Institute Press (a part of the U.S. Naval Institute, an independent, non-partisan, non-profit, professional military membership association). The NIP prints books that explore naval and military history in both fictional and nonfiction methods. At the end of, "The Stringbags," Ennis actually breaks-down what was true about his group of British Naval troops who he shares three different stories of in the book, and what was fictionalized. Even if Ennis took a degree of dramatic license with the book, it is still steeped in fact and fascinating details about World War II. 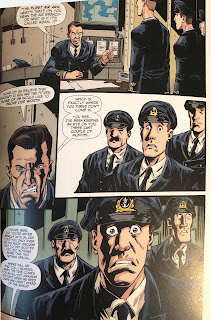 P.J. Holden provides the artwork throughout, "The Stringbags," and while my advance review copy was in both color and black-and-white, the finished product will be full-color. Holden's art is fantastic in color or without it, however, with his highly expressive faces being most impressive to me. You can really feel the emotions of these soldiers from the page thanks to his great mastery of the human body. That isn't to say he lacks skill at drawing warplanes in explosive fights, however, he excels at that too. I just was really struck by how well he drew the humans at the heart of the story.

"The Stringbags," is Garth Ennis doing what he does best--telling in-depth war stories full of historical detail along with some fiction. P.J. Holden provides some fantastic art as well and the whole book is a lovely read. I look forward to its official release which I believe is sometime in May of this year.
5 out of 5 stars.

Note: A copy of, "The Stringbags," was provided for the purposes of review as I am on the press list for Dead Reckoning.
Posted by David Charles Bitterbaum at 12:12 PM