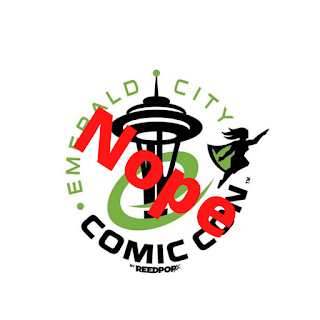 I was just talking about how Emerald City Comic-Con was suffering due to COVID-19 and how it was due to take place in the American city currently hardest-hit by the illness, Seattle. A lot of vendors or artists were pulling-out and many people were going to skip the show. I guess it got to a point where the best decision was to cancel ECCC for now, because it has been postponed until (tentatively) this Summer. Everyone is getting a refund and the expectation/wish is that by the Summer things will be better and not worse regarding COVID-19. This is still really saddening for the number of folk excited to attend the show despite everything going on.

As a response to this delay, many people and companies that had stuff ready to sell at the show are now going to sell wares online it would appear, and I imagine some things like Funko Pop's shared exclusives will be in stores still as those were shipped-out already (like my much-desired Emperor Doom Funko Pop). This is a bummer, but ReedPop (the people behind ECCC) and the city of Seattle decided it was the safest choice. By the Summer maybe the show can be held without so much fear and concern. I honestly hope that will be the case.
Posted by David Charles Bitterbaum at 6:23 PM