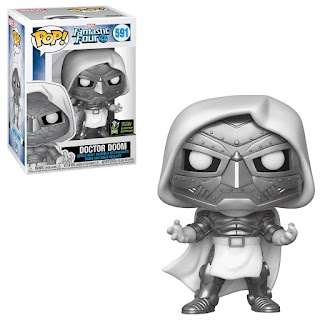 I don't collect too many Funko Pops these days outside of some favorite characters. There are just so many trying to keep up with any particular company or line is a great way to go both broke and mad. That said, I really want this Doctor Doom Funko Pop that features him as Emperor Doom from the solid, "Secret Wars," mini-series which Jonathan Hickman wrote and Esad Ribic illustrated some years ago. It looks a lot like the more recent Doctor Doom Funko Pop, but with his extra-regal white robes.

This Emperor Doom Funko Pop is a shared exclusive with the comic convention C2E2 that just occurred and will also be at Target here in America and other assorted stores or websites Worldwide. I think I'm going to buy one and look forward to having it look over my other Pops all imposingly.
Posted by David Charles Bitterbaum at 9:43 PM