A Return To Form--Supreme Power #1 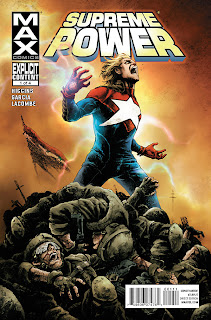 Supreme Power #1
Supreme Power is back, baby! Oh, and it doesn't suck anymore like when it was a non-Max title (excluding that good Hyperion VS Nighthawk mini-series)! Yup, this is back to its roots, focusing on the main characters without those Marvel-Universe analogues of Iron Man or Captain America, bringing in the political allegory, and not shying away from swearing or being "adult" in the sense of actually having complex conversations about identity and such. Yeah, I'm enjoying this.
We're set few years after the horrendous run of Supreme Power where the title changed and Mark Milton (Hyperion) went bonkers and blew everything up before flying away, and this comic quickly uses that as a plot point but sweeps away all the junk that is useless (the extra characters, how Nick Fury was invovled, and so forth). This is all Joe Ledger's show AKA good ol' Doctor Spectrum. We talk about Mark Milton and he will be showing up later on in the series for sure, but this is about the complexities of being a good superhero who owes everything you are to a man people now despise. There is also a great fight scene and a bit with a speech by the President that is eerily like what was said after we killed Osama Bin Laden. Whether this is coincidental as this comic was probably completed before we killed Bin Laden in May, or they went back and re-wrote some stuff, I don't know, but it sure is interesting with the political allegory of super-powered terrorists.

The art is pretty decent, even though it can't measure up to the stellar stuff Gary Frank turned in when he did the original Supreme Power--I was more concerned with how the story would turn out though, and luckily that came out fine. If the end of this issue is any indication we are in for some trouble from Mark Milton and there will indeed be some epic fighting on the horizon. For now though, I'm digging the mostly quiet introspection this issue delivered with that short bout of violence to keep things busy. I just wonder where Nighthawk is, that guy is cool.
As I said in the title of my post, this is a return to form for the series, and also a bit of an apology for those of us who sat through the awful stuff that occured after Straczynski abruptly left the series (he loves just quitting stuff, it seems). I'm excited to see what happens and hope these four issues either wrap up the events of this Universe satisfactorily or are popular enough we get another mini-series or even an ongoing--as long as it is good too.
4 out of 5 stars.
Posted by David Charles Bitterbaum at 1:18 PM