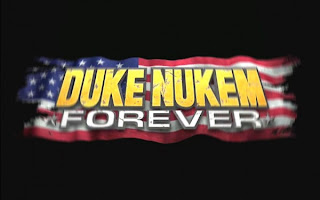 I've rented the Duke Nukem Forever video-game and a part of me still can't believe it actually came out. I thought I would share my early impressions. Mainly, I think people expected too much. It was in development for 12 years with them constantly stopping and starting over, and then it finally comes out and you want to say, "I waited 12 years for this?" but you didn't really, you waited a shorter amount of time for this game. That said, this is still pretty mediocre, if fun.

The graphics are okay, with people looking a little plastic and stiff, but I can deal with it. The whole checkpoint system feels like something out of the 1990s, which to be fair is where this game sort of is from, the humor is rude and crass, but I expected that, and I'll admit that while a fair amount of jokes fall flat there are some quality ones that make you crack a smile. Yes, it's crude and sexist, but it's Duke Nukem, you expect that. You don't watch South Park and expect it not to have swearing, so even though I could get angry about how the video game pretty much is portraying women as crazed sex-fiends who are obsessed with Duke, I won't, because we are essentially seeing the world through Duke's eyes, and when you're Duke Nukem everything is a cliche--and that's part of the humor of the game. One thing I can't excuse though, are the horrible load times.

I have been playing Duke Nukem Forever on the Playstation 3 and spoke with someone who is playing it for the Xbox 360 and we both do not enjoy the extremely long load times a player encounters anytime one moves to a new game area or dies and has to re-load at a new checkpoint. I wouldn't mind if we were talking 10, even 20 seconds. However, I'm discussing a minute, minute-and-half to almost two minutes of loading time here. That is just incredibly dull and a real momentum killer. One minute you're blasting aliens and hopping on a turret getting all excited...and then you're waiting forever for the game to load the next bit. Yeah, it sucks and is probably my biggest complaint in regards to the game. 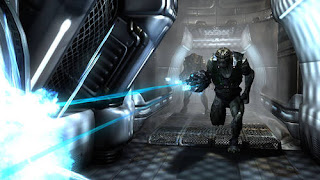 Gameplay is decent enough; it's your usual run-and-gun with not much focus on finding cover or anything, but the little ways you can interact with the environment to boost Duke's "Ego" AKA health bar are fun, be it putting popcorn in a microwave or lifting weights. These little touches where you get to mess around with stuff are genuinely cool and I quite like them, with the fact that they add to your life-bar just being a sweet bonus.

About maybe almost 3 hours into the game these are the thoughts I've had so far, and my observations could of course change as I get further into the game. This is a game that people probably expected to be completely awesome, and they are going to be horribly disappointed if they go in wanting something incredible. If you just want a fun little shooter with some good humor though, you'll have a fun time from what I've found so far. Those load times are really almost a deal-breaker for me though when it comes to having to sit there and wait, especially during tougher segments when I keep dying.
Posted by David Charles Bitterbaum at 10:00 AM