Flashpoint: Batman, Knight Of Vengeance AKA The Only Tie-In Of The Countless I'm Getting 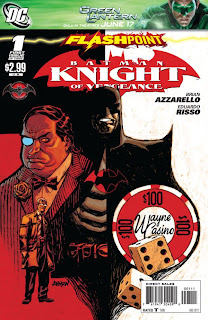 Flashpoint: Batman, Knight of Vengeance #1
This is the only Flashpoint tie-in of the numerous ones I am getting, and I am happy I made the exception of getting it because this is some really good stuff!

If you don't know the big twist about who Batman is in the Flashpoint Universe by now you must not care if it's spoiled so I'm going to tell it, as you have to know in order to review this comic--it's Thomas Wayne, Bruce Wayne's father. He survived the shooting and it seems Bruce and maybe Martha died. So, we've got a much older Batman in a noir-type tale written by Brian Azzarello with art by the great Eduardo Risso, whom you might also know as a good team when they come together from former long-time collaboration on 100 bullets. Well, things work pretty snazzily here too, with new takes on certain characters and some being surprisingly similar (he may not be a Commissioner, but Gordon is still all about the law). Plus, Risso's unique style makes everything just look incredible whether it is people talking or a fight scene in the sewer. 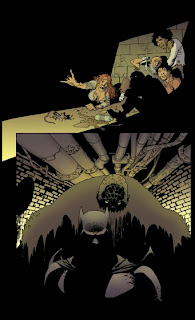 Some of the Flashpoint tie-ins hint big-time at how they relate to the main comic, and some don't seem to at all I've been told. Thomas Wayne is a big part of Flashpoint and it seems this takes place sometime after his meeting with Barry Allen in that comic (as least I would surmise it does) as at one point he asks Gordon about how if he could change the world, if he would--which of course Wayne is trying to do with Allen in the main Flashpoint comic. The point of these tie-ins is of course to provide more of an interesting story about the characters that populate the world of Flashpoint than to e involved with the main title, and this is a great comic in its own right with its older, much more world-worn Batman who isn't afraid to kill, so I didn't mind it mentioning the main series but didn't think it needed to. 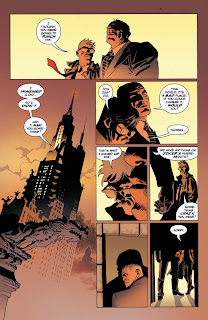 This is a great read, thanks to the fabulous art of Risso, and the expert writing of Azzarello which usually is exemplary when put into a noir-type story like this where Azzarello's knack for writing dialogue can shine. This may essentially just be a tie-in comic to a big event, but it is a very strong comic in its own right that can be judged based on its own merits. I really enjoyed it, more than even Flashpoint itself so far!
4.5 out of 5 stars.
Posted by David Charles Bitterbaum at 12:30 PM