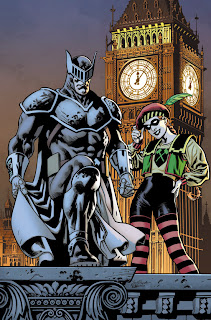 Knight and Squire #1-6
The Knight is essentially the British version of Batman, with the Squire serving as the Robin. Paul Cornell is a great British writer. This combination makes sense. When he was put on this mini-series he created something phenomenal and hilarious that also towards the end gets a bit meta-textual, and you know I love when comics do that. Read on to hear about a dynamite series.

The great thing about this series is that the first four issues seem to be one-off tales that actually cleverly set up the big conflict that occurs in issue five and six. With the groundwork laid and hints put in place Cornell is able to set something genius in motion that I won't outright spoil, although I am going to give away one of the big reveals at the end of issue #5, so you have been warned. Basically, over the first four issues Cornell shows a bar where all the heroes and villains meet up to just relax, the Knight and Squire fight some evil dancers, combat a evil clone of King George who masters social-networking and tries to take over England when not talking to himself--seriously: 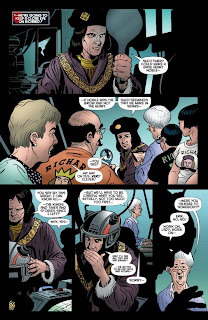 and in the fourth issue the Knight fights himself in a sense. It's all good light-hearted fun, which makes the jolt we get in issue #5 quite shocking. You see, the British Joker, Jarvis Poker, is dying. He's actually a very nice and harmless fellow who never really has had it in himself to commit a crime. The thing is, when he starts doing showy (yet still quite non-troublesome) things to get attention in a sort of, "Going out in a blaze of glory,"way, the real Joker shows up, and is not amused. At this point he tells Poker he is sick of all this light and campy stuff and is going to introduce some grimness into the atmosphere. Hence, we get an issue six which has a meta-angle of comics going from fun and humorous to dark and gritty. It's very clever, and I liked it, along with the aforementioned conclusion which wrapped things up expertly. 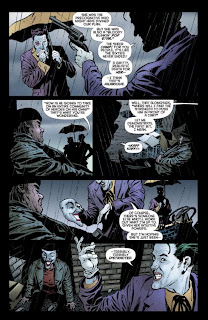 This was a great series. Those early issues are just plain hilarious and the swerve in later issues is both intriguing and works in the context of the story. After really hating Action Comics #901 it's nice to know that while maybe Cornell is having some trouble writing Superman he is still an extremely talented writer. I mean, I adored this.
5 out of 5 stars.
Batman: Knight and Squire

if you want to order the trade now and enjoy it in early July.
Posted by David Charles Bitterbaum at 3:00 PM