Simon Hanselmann's "Below Ambition," Mixes Depressing and Funny into a Strangely Satisfying Blend

Simon Hanselmann has spent years doing his, "Megahex," comics featuring Megg, Mogg, Owl, Werewolf Jones, and other surreal characters. He then achieved massive critical and commercial success with his strip, "Crisis Zone." It chronicled his characters in an alternate continuity of sorts as they responded in real-time (he did the strip daily) to COVID-19 shutting everything down throughout 2020 and resulting in utter mayhem. A collection of, "Crisis Zone," was published in 2021 and it was a massive book that practically burst at the seams with all the wild hijinks and events that took place. It was one of my favorite comics of the year. How does Hanselmann possibly follow up such a book? Well, you can't really go larger, so why not narrow the focus? Hence, "Below Ambition."
"Below Ambition," is a series of vignettes that focus on Megg and Werewolf Jones as their two-person band, Horse Mania, tries and fails to succeed at live shows because they frankly suck. We witness Megg and WJ failing miserably to get their tech to work or make anything resembling music, all the while being absolutely vicious to any other band sharing sets with them at various bars. Compared to the sprawling, "Crisis Zone," this is absolutely minimalist, focusing mainly on Megg and WJ simply being miserable, high/drunk, and getting into trouble when they aren't screwing around in the alleys behind bars. It sounds horrifically dark and it is, but Hanselmann is a master at injecting humor into even the grimmest of situations. One strip features Megg so intoxicated she can only lay on the stage and beg for someone to just kill her while a bar's audience stares on aghast besides a friend/drug dealer of WJ's yelling about how the show needs some, "Live suicide!" The humor is as pitch-black as a cup of espresso and hits you just as hard. 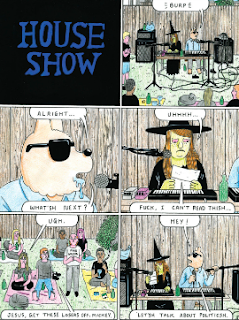 If I may have a light spoiler in my review, the last strip takes us the farthest into the future I think a, "Megahex," comic has ever gone, featuring Megg with a young daughter who stumbles upon an old, "Horse Mania," record. This inspires a variety of feelings in Megg from nostalgic, to sad, to somewhat horny. The result is the book closing with a scene that is as raunchy and graphic as it is strangely sweet. I honestly could see people who only know Hanselmann for, "Crisis Zone," being really turned off by the extremely dark tone of, "Below Ambition." However, if someone is familiar with his earlier works or liked the really sorrowful-yet-funny, "Bad Gateway," then this should appeal to them immensely. I dug it.
5 out of 5 stars.
Posted by David Charles Bitterbaum at 12:37 PM