Film Friday/Flashback Friday: "Die Another Day," Did Have at Least One Clever Idea 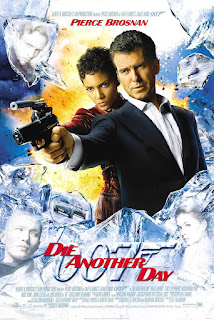 I was reading an article by Kyle Turner on, "Paste," that doesn't argue so much that, "Die Another Day," was good, but had some interesting ideas. The movie came out in 2002 and I recall seeing it in theaters and another time some years later, but that was it. Hence, my memory of the flick is a bit foggy, but I can say it was not very good. Overreliance on CGI, a plot that leaned far too heavily in sci-fi for my liking, and just general messiness. However, one over-the-top element actually kind of works in retrospect. The big villain of the movie is a North Korean terrorist--Col. Sun-Tan Moon--and he's had ample gene therapy and plastic surgery to resemble a white British dude modeled after Pierce Brosnan's James Bond.

Going by the name Gustav Graves, he's able to gain power and respect now so that he can take those he hates (but resembles) down. As Turner observes in his article, "On a literal level, it’s fascinating and unsettling, racialization inverting itself and whiteness becoming a snake eating its own tail: Graves tells Bond that he modeled his persona after him, with, 'Unjustifiable swagger,' and, 'crass quips,' a funhouse mirror of the man whose love only extends to Queen and country." The big baddie is someone who exists basically as a mockery of everything James Bond is and stands for. That's such a surreal and strange idea that it is one part of the movie which actually kind of works even if to get there you need a bunch of made-up jargon about gene replacement and altering DNA.

Someone hates Bond and the UK so much that he basically becomes an extreme and nearly parodic version of what he despises and finds himself beloved for it. The whole thing is a bit like when Max and Leo try to make a play so bad it'll bomb in, "The Producers," but they end up with a massive hit because the result is so absurd that the concept strangely works. It's just that in, "Die Another Day," we don't get, "Springtime for Hitler," we get a North Korean terrorist who transforms himself into a WASP-y Brit.

Don't get me wrong, "Die Another Day," is still pretty low on my list of Bond movies I've seen (The Daniel Craig-led, "Casino Royale," is probably my all-time favorite), but I'll admit it does at least one thing that is interesting and clever along with all the less entertaining stuff. To be fair, Halle Berry does what she can with her role as Bond's latest fling, but if you want Berry giving her all in a genre flick, I'd recommend, "Swordfish," anytime over this movie.