Television Tuesday: The First Two Episodes of, "Welcome to Chippendales," Are Fantastic 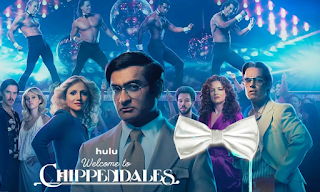 Up until recently, I did not realize how much bloodshed was involved in the male stripping industry, at least in regards to Chippendales. There have been podcasts and documentaries discussing the rise and fall of the famous brand, but, "Welcome to Chippendales," is a fantastic dramatization of the whole thing, delivered in a tone that is both at once ominous and darkly comic. Kumail Nanjiani plays the founder of Chippendales, Steve Banerjee. An Indian immigrant who used his savings from working at a gas station to found a Backgammon club, once that started failing he pivoted to a number of ideas before a strip club for women resulted in him hitting a gold mine. Then things went horribly wrong.
The first two episodes of this eight-episode series dropped last week on Hulu and a third episode (which I still need to watch) is out today. Through these two initial entries, we see how Chippendales rose to fame quite quickly through Banerjee's keen business mind and assistance from choreographer Nick De Noia (played superbly by Murray Bartlett). The whole cast is great, with Dan Stevens' Paul Snider absolutely dripping with an equal mixture of sleaze and desperation. Annaleigh Ashford as Chippendales' accountant and Banerjee's love interest, Irene, is fantastic as well. I'd be remiss if I didn't mention how Juliette Lewis is always a treat in any role and she's here along with Quentin Plair as a dancer named Otis with a lot more to him than dancing. 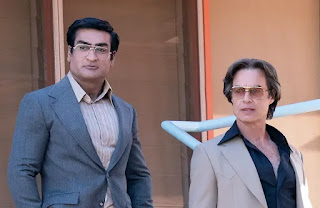 There are elements of, "Welcome to Chippendales," that are a bit exaggerated or fictionalized, but when you Google certain things that happen in the show it is astounding how stranger truth is than fiction in some cases. I know a bit about everything that happens, but I'm still incredibly entertained seeing how we get there, with Nanjiani totally stealing the show as Banerjee. If you have Hulu I'd recommend tuning in and getting ready for one of the most bizarre stories of show business you'll ever witness.
5 out of 5 stars (for the first two episodes).
Posted by David Charles Bitterbaum at 12:37 PM