Twitter is Really Falling Apart Since Musk Took Over 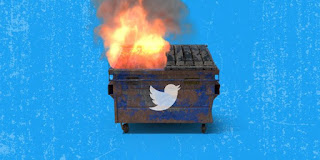 Elon Musk managed to do something that actually impressed me. Namely, he has run Twitter into the ground faster than I could have imagined possible. From firing a ton of people to wanting to rehire them, then enraging myself and others with his proposal of paying for a blue checkmark, to having fake accounts with blue checkmarks wreaking havoc it's been a year's worth of mayhem in a handful of weeks. As CNN puts it, "Two weeks after Elon Musk completed his acquisition of Twitter, the future of the company has never looked less certain." Bloomberg observed we are basically watching Twitter implode in real time.

I'm just sitting here thinking about how I've always observed Elon Musk will have good ideas but executes them terribly. Electric cars are great, Tesla's are overpriced junk. Space travel is a worthy cause, SpaceX often looks like a mess. Now we have Musk wanting Twitter to be some great equalizer of free speech with no limits, but without any limits it is a wild west of hate speech, fraud, and general mischief. Even with free speech you can't legally yell, "Fire," in a crowded movie theater just for a laugh and Musk is seeing what absolute free speech does to Twitter--it makes the metaphorical fire all-too-real and burns down the theater of abusridities that took years to build in remarkable time. I don't know how this will end. I do know it probably won't end well.

Posted by David Charles Bitterbaum at 10:07 AM