Film Friday: "Nope," and my Theories About It 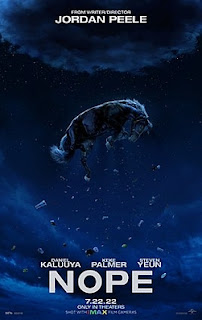 Note: This is more of an examination of the meaning of, "Nope," than a review but I do still have a rating at the end of the article. That said, I spoil everything and this article may not make a ton of sense until you check the movie out.

I didn't have a chance to catch, "Nope," in theaters, but I was able to borrow a DVD from a friend of mine who bought it so that I could give the flick a viewing. Directed, written, and produced by Jordan Peele, I found, "Nope," to be really good. I also wasn't sure exactly what it all meant and found a lot of the internet agreed with me. Is it a straightforward tale of an alien (because midway through the movie it is revealed that it isn't a ship but a hungry alien creature that flies) and some horse trainers who live on a property that want to capture proof of it? Is it a religious metaphor? What was with the whole, "Gordy," subplot that had Steven Yeun's character? Why did Keith David's character have to die in the first five minutes and only briefly appear in flashbacks when he's such a fantastic actor (that's more just me being bummed he was in the movie so little, though it makes sense for the story). I really liked, "Nope," and do have some theories.

A running theme is not looking animals in the eye. Early in the movie Otis Junior/OJ (played by Daniel Kaluuya) tells people on a set to not look in the horse's eyes. Also, it is known you should not look apes in the eye as it can be a sign of aggression, and Gordy is, of course, a chimp in those scenes set in the past. The alien itself (referred to as, "Jean Jacket,") seems to need to be looked at in order to eat people. There are also discussions of animals and their predatory behaviors with how humans will try to work with them and think them tamed, but something wild remains. I think we have the whole story with Gordy to help illustrate the idea that nature cannot be controlled and it will try its hardest to fight against us, with the alien being a wild creature itself--albeit one from some other planet. That's one idea I had, that this is a metaphor for the folly of thinking we can control nature. 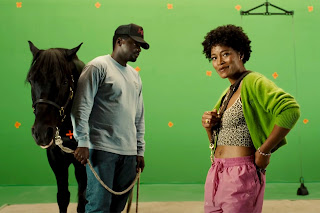 Perhaps the movie is also a metaphor for the entertainment industry itself and its mistreatment of people. Kalluuya and his sister Emerald (KeKe Palmer) spent years of their life helping their dad (the aforementioned Keith David) train horses for Hollywood, and have little thanks to show for it and a farm in danger of closing. The movie and television industry rendered Steven Yeun's character traumatized from an ape reverting to its primal instincts--an ape that belonged in the wild and not on a set ("Nope," itself uses a CG ape so as to not be hypocritical in this point). Once the alien appears it becomes an obsession of OJ and Emerald to capture proof of it too, consequences be damned. I'm not alone in seeing a symbolism for, "The explorative nature of Hollywood," possibly being symbolically examined.

If you check Google for the thoughts of everyone on, "Nope," you can find so many varied opinions that it'll make your head spin. Some people even claim the fact the message isn't crystal clear makes, "Nope," a bad movie--I find this funny but also a bit depressing in an era when we as a society seem to often want the, "Point," of narrative spoon-fed to us. "Nope," is a seemingly simple movie about an alien hanging around a ranch that contains many layers. I quite like that about it even if it drags a little toward the end once the alien is fully exposed and the flick shifts from a tense psychological thriller/horror film to more of an outright sci-fi action production. It's good stuff.