"Bad Gateway," Review AKA Simon Hanselmann Has Done it Again! 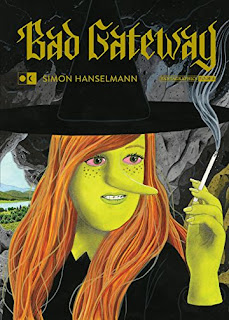 I have voiced how much I love the work of Simon Hanselmann before. Whether it is his mini-comics or his big books, he is an amazing creator who manages to mix humor and sadness in his writing like nobody else and makes some incredibly gorgeous artwork too. "Bad Gateway," is published by Fantagraphics and follows-up on all of the previous stories with the main characters, Megg and Mogg (along with all their friends/enemies/romance partners/sometimes all three at once) but it can be read by someone going-in fresh as it summarizes all the madness from before in a handy two-page spread before taking us back into the really messed-up lives of these individuals.

Megg is a witch, Mogg is a cat and they are in a long-term relationship but both are basically miserable with each other. Their current roommate is a man named Werewolf Jones who sells drugs when he isn't using them-up because their old roommate, Owl, was maybe the one responsible person they knew and they drove him away by being terrible towards him. Megg has strong feelings for Booger--she used to be Boogeyman but since transitioning to female is known as Booger--and Mogg hates Booger and blames her for the trouble in Megg and Moog's relationship although Megg cheating with Booger off-and-on is a symptom of the domestic-trouble, not a cause. Also, they really need to get money for rent but blew it all on drugs and Megg might not pass her evaluation to keep getting Governmental support, so stuff in general is pretty messed-up. This sounds dreary, and it at times is, but this book is also hilarious. 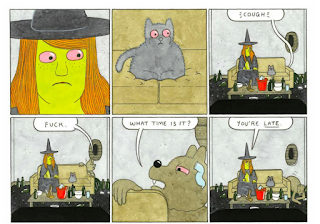 Werewolf Jones anytime he appears in any of Hanselmann's books continues to be a source of both misery and hilarity. The man is messed-up and as bad at being a roommate as he is being a Dad or hard-working employee. The only thing Jones is really good for is coming-up with terrible ideas and passing-out from being too drunk or too high to function. As readers of the book we feel a little bad for him, but also frankly disgusted with much of his behavior and general treatment towards others. Megg and Moog inspire a little more sympathy as they sometimes are somewhat trying to not just be miserable, but between their reliance on a whole lot of drugs and basically being co-enablers of their worst impulses it is just tragic to witness them go about their day-to-day lives. Again, though, this book is funny too so don't think you'll just be sobbing the whole time you read it.

Hanselmann's art-skill are top-notch, with his masterfully illustrating everything from a beautiful landscape to the garbage-covered home of Megg, Mogg, and Werewolf Jones. Whether he's drawing a nasty and crowded bus or a quiet night's drive, Hanselmann expertly balances the gorgeous and grotesque in a manner that invites readers to just be drawn into a page and dive-in to scenes no matter how disgusting the things he illustrates so incredibly are (Werewolf Jones is often naked and needs to bathe for sure). When it comes naming creators who are currently at the top of their game making comics currently, Hanselmann is someone who has to make most short-lists. 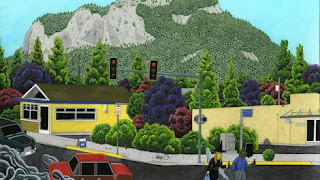 "Bad Gateway," is a book that is equally tragic and funny with some incredible illustrations that mesh perfectly with the purposely disjointed tone. I would not be surprised if this book appears on many, "Best-of," lists at the end of the year, and imagine it'll probably be one of my top titles too, with Simon Hanselmann being due lots and lost of praise heaped upon him for his incredible work. I rate this book 5 out of 5 stars and will most likely be singing its praises for a good long while.
Posted by David Charles Bitterbaum at 5:23 PM