About My Son, Clarkson 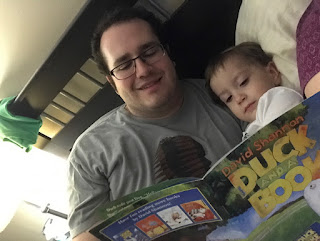 I want to tell everyone about someone. My son, Clarkson, is 2 and-a-half years old. He is energetic, loves to laugh, adores foods that are crunchy (apples and almost any kind of chip are arguably his favorites), enjoys kisses as well as tickles, and has autism. His developmental delays started becoming noticeable after he had a follow-up NICU appointment at 1-and-a-half years of age (due to being a preemie he had consistent check-ups until he turned two). Whereas once he had seemed to mostly be on-track developmentally, some regression was noticeable (less babbling, minimal interest in responding to people to the point it was wondered if he might have a hearing problem, and so forth). We started working with a number of organizations that help children with delays such as Parents as Teachers which then also referred us to First Steps (we didn't qualify for First Steps when Clarkson was initially born due to his being too big, but we did qualify after a later First Steps' evaluation confirmed he had some notable delays).

We worked with those programs and saw improvement and development, but Clarkson still seemed to be lagging behind. He was mostly nonverbal outside of, "Mom," "Dad," and, "No." He never wanted to look at people or really interact with them--adults or kids. He was object-driven and not people-driven. At his last NICU follow-up after he turned 2 they said the delays were bigger, and while they could not officially diagnose anything as their specialty was as neonatologists it looked quite likely Clarkson may have a form of autism. That was March of 2019. From that point we started getting more services from First Steps by adding in more behavior therapy in the form of ABA and enrolled Clarkson in half-day daycare three days a week to work on his socialization with other children as the daycare we wanted him to try only took kids two-and-up, which he had just turned. We began the lengthy process of filling-out and submitting paperwork to have Clarkson tested officially for ASD--Autism Spectrum Disorder.
On July 30th, 2019, we saw a number of specialists, reviewed everything about Clarkson with them, assisted with a variety of tests that Clarkson did in addition to his being observed, and were told that yes, Clarkson has ASD. We were informed he had the most severe level, level 3, due to the delays being at the point where overall developmentally he was at about a 1 year-old's level of development and his speech and language was at the point of an 8 or 9 month old child. The diagnosis was not a surprise, it was expected, but it still was anxiety-inducing and stress-causing as we did not realize just how delayed Clarkson arguably was. I will freely admit to feeling sad, worried, and otherwise upset at knowing my son was not neurotypical. Perhaps I wished he would be as I am someone with my own issues in the form of depression, anxiety, and so forth.

Knowing my son Clarkson had autism put me awash in a sea of emotions. Being reassured that a number of people with Autism live very fulfilling lives without the need for much extra assistance and others do need help was of some comfort, yet still I was worrying. Being told the statistics on speech and talking and wondering if my son will have much of any vocabulary was often being thought-about in my mind. Feeling guilty about being upset because there are children who are born with extremely severe disabilities like missing limbs, being unable to even breathe or eat on their own, because here was my son who has stellar motor skills (those are not delayed, he can jump and run like nobody's business) and is generally very joyful as long as he doesn't need a nap (then he gets really cranky) who happens to have ASD but is otherwise perfectly healthy. You feel a lot of ways coming to an understanding that you are a parent of a child with special needs.

With Clarkson's diagnosis we were able to increase the hours of some of his therapies but also still make sure he has plenty of time to have fun, nap, and otherwise enjoy life as a 2 year-old. The people we work with for Clarkson's therapies are amazing and understanding. They have helped us immensely on the journey of noticing delays, to getting tested, to having an official diagnosis of ASD. I do not love my son any less or feel any different about him knowing he has ASD, but I will say I worry about the difficulties he may face in life. The World is already hard, and being different in any way can make it even more tricky. Clarkson has many people who love him however, from his aunts and uncles to his grandparents and our family friends so no matter what challenges he'll face, there are people eager to back him up.

As Clarkson starts to grow older and with the assistance of therapy he is now much more interested in people and loves to interact with kids his age, playing with toys and sharing laughter with friends. Clarkson is learning how to do stuff at his own pace and we are there to encourage him to engage in both independent and social play, learn about sorting, counting, and shapes--all of that stuff that maybe requires he puts forth a little bit of extra effort compared to other kids because he has his autism making learning certain things a little bit more strenuous. He is learning though, and developing new skills and interests everyday.
No one should ever tell you how you can or cannot feel as a parent of a child with special needs. You can be sad and worry. You can be happy for the small accomplishments that others maybe take their kid being able to do for granted and the big accomplishments as well. You as the parent are not, "Broken," due to having a child with special needs. Your child is not broken either, just different and working on things in their own way with help from others. When it comes to ASD there is a lot of information online, and a whole heaping ton of misinformation as well which can make finding accurate data and facts a little trickier. There are some extremely false beliefs about autism and off-the-wall theories about how everything from vitamin-shots to special diets can, "Cure it," as well as if it is caused by everything from radio signals to vaccines due to one fraudulent study decades ago. We do not know an exact cause of autism and there is no special treatment or cure. However, working with your child to help them grow and develop with peer-reviewed and scientifically-proven practices is going to help them a lot more than denying your child is different or buying into outlandish theories with snake-oil salesman peddling cures and fix-alls that are more quackery than medicine.

Clarkson having autism is not a secret. We have told friends, family, and even strangers out-and-about who ask questions about why he makes little hissing sounds when he is happy or slaps his legs when he's excited. We explain he does not yet know how to talk but is working on it, and his slapping of his legs is a form of stimming he does to help with processing everything he is taking-in. I just have not really talked about all this on Facebook (outside of some groups for parents I joined) or on my blog as it has taken some time to process everything. That, and I just did not feel ready to deal with the possible ignorance I may face due to all the aforementioned incorrect opinions and misinformation/outright lies about autism. I am at a point now however where I won't hesitate to tell a person claiming vaccines caused Clarkson's autism to shut their idiot mouth, and I will feel zero urge to apologize for calling them an idiot due to the fact I will always defend my son from ignorance.

I am also now in a mental place where I do not feel self-conscious if he starts having a sensory meltdown or gets loud at the grocery store. People can stare and assume he is simply behaving badly, they are wrong. I do not need to loudly announce, "My son has autism," to these people, they can incorrectly guess whatever they want, but should someone inquire about Clarkson's sounds and behaviors, I will without hesitation provide information and education. I want to inform people about ASD and I also want them to know it is not the only thing they should be aware of when it comes to my child as that is not what defines him. I will tell them how Clarkson has ASD, yes, but I will also let people know he is a big fan of jumping on trampolines, how one of his favorite shows is inexplicably, "The Price is Right," because he seems to love how much people on the show shout and cheer, and that Clarkson used to not really be into books but in the past month has developed a strong affinity towards ones about animals such as a short book about a duck with a book of his own he shares with the other farm animals and another about a bear who steals honey from bees (not Winnie the Pooh, this is some random dumb bear who also gets stuck in a bunny's burrow when he tries to escape the angry bees, it is pretty funny).

My son is named Clarkson and he is one of the most important people in the world to me. When he and my wife, Samii, are with me on the couch that means the two individuals I love more than anything else are sitting by my side and that makes me feel so happy. I would not change Clarkson in any way and every single day I am thankful he is in the life of my wife and myself. Today before he fell asleep for his nap he laid-down next to me, looked in my eyes,  and gave me the biggest loving smile. I told him I loved him and gave him a kiss on the cheek at which point he dozed-off and I moved him to his crib so he could get in a quality nap (again, he is very cranky without his nap). That is just one moment out of many I get to treasure thanks to having Clarkson as my son. I wanted to tell you all about him, and now that I have done so I hope you see just how incredible a person he is too.
Posted by David Charles Bitterbaum at 2:46 PM