Tales From the Dollar Bin: X-Men #1 AKA That Time the X-Men Relaunched and Fought Vampires 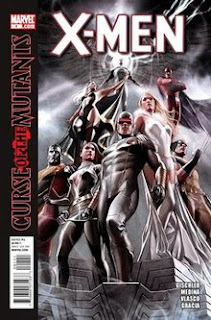 The whole X-Men line is heading towards a big relaunch in these coming months and that makes me think back on all the times it has happened before. I was checking the dollar bin at V-Stock and came across one such example--,"X-Men," #1 and #2 of the, "Curse of the Mutants," story-line. After all, the comic, "X-Men," has been relaunched a number of times and in mid-2010 it started-over yet again. They were still living by San Francisco on their own little island called Utopia but they'd bested Norman Osborn during his, "Dark Reign," that occurred after, "Secret Invasion," and everything seemed relatively peachy-keen. However, the X-Men can never be allowed to have happiness so vampires started attacking them, because why not? The first arc of the new, "X-Men," series featured Mutant-on-Vampire action (not in a dirty way like that sounds though) and Blade drops-in too because his whole thing is killing vampires. This story-line is most notable for how fan-favorite mutant Jubilee was turned into a vampire (that doesn't happen in the two debut issues I picked-up for a dollar, but I recall that occurred). That was eventually quietly done away with, but it was kind of wild at the time.
This re-launch of the X-Men was designed with the intention of having them interact with the rest of the Marvel Universe a great deal so after the shenanigans with vampires there were some other plot-lines with folk like Spider-Man and the Fantastic Four stopping by. Eventually this all led into that big, "Avengers VS X-Men," event that was honestly a bit of a mess and then Brian Michael Bendis (this is before his current gig at DC) re-launched the X-Men yet again in 2012 with his big story where the X-Men from the past are brought to present by Beast because time-travel never causes problems, right? You can't tell as this is text, but that last sentence was dripping with sarcasm.

I kinda read a bit of the time-displaced X-Men arc, but then the X-books in general fell to the wayside for me as Marvel tried as hard as it could to ignore mutants and instead make us care about the Inhumans (even going so far as to have Inhuman and Mutants fighting for unclear reasons beyond a magic cloud) before realizing nobody would ever care about the Inhumans beyond their role as supporting characters (a few individual characters who happen to be Inhumans and beloved like Ms. Marvel aside) and they were mostly killed-off in 2018.
Now we are at the latest re-launch of the X-Men however with Jonathan Hickman steering the ship and it looks really promising so far. I am actually very interested in comics related to the X-Men again and will be reading them with much enthusiasm. I don't know if these new X-Men comics will become popular and hard-to-find years from now like some of the older stories, or thought of as mostly unremarkable and easy to find for cheap. However, that uncertainty is one thing that always makes it fun to tell...a tale from the dollar bin!
Posted by David Charles Bitterbaum at 1:12 PM