I'm Shocked it Took This Long to Move Towards Impeaching Trump 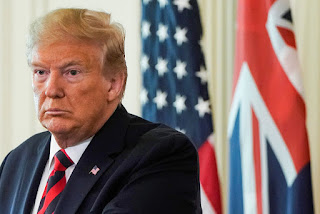 The House of Representatives is moving to impeach Trump due to the possibility he promised political favors/threatened to withhold military support from the Ukraine unless they tried to get him dirt on Hunter Biden (the son of Presidential Candidate Joe Biden), and I'm amazed it took this long for  House Democrats (and one or two Republicans) to grow a spine and for Impeachment to actually be, "On the table." Out of so many impeachable offenses it seems one finally is sticking. Perhaps Nancy Pelosi was scared that impeaching Trump would offend some theoretical and mythological swing voters who supported Trump in 2016 but might vote for a Democrat in 2020 and that is why she and the House Dems dragged their feet so long, but finally something is happening. I would say anyone who actually still supports Trump at this point is so opposed to the reality of how he is a corrupt, treasonous human being thinking they'll ever vote for a Democrat is hilariously misguided, but that's just my opinion.

Now, even if Trump is impeached this simply means there will be a trial in the Senate where all the Republicans who support their orange tyrant over the good of the Nation will make sure he is not kicked-out of office, but it will serve to illustrate just how awful this President is and as time goes on the Republicans who put their thirst for power ahead of a functioning and healthy Democracy will forever be remembered in history as the terrible humans they are/were. Their actions and Trump's behavior will serve as a big ol' stain as embarrassing to our Country as McCarthyism and the Japanese Internment Camps. I just pray Trump and his cronies like Mitch McConnell are not able to rig the vote enough to prevent all the reasonable people who see how terrible Trump is to get him thrown out of office and put firmly in prison where he belongs.
Posted by David Charles Bitterbaum at 11:35 AM