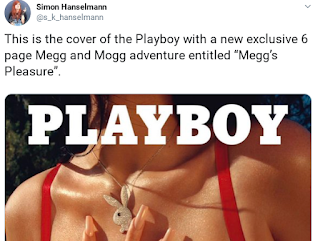 I saw this tweet from the amazingly talented Simon Hanselmann, whose work I of course adore and always try to buy copies of. He has a six-page strip in the latest issue of, "Playboy," the Fall 2019, "Pleasure," themed issue. Upon seeing this today I figured it would not be too hard to get a copy, right? "Playboy," has spoken publicly before about how they sell less copies due to the fact the internet has made it incredibly easier to see nudity (or outright sex/crazy fetishes/etc.) and now the people who still read, "Playboy," honestly do so for the quality articles or in this case, comics. I went to the Playboy webstore to order a copy and found it was sold-out. I found this odd, figured it was maybe a glitch or temporary and decided to check eBay where copies were selling for double cover-price or more. At this point I was confused and did some Googling. Upon doing so I learned from news websites that this issue is really popular because it features none other than Kylie Jenner posing nude with boyfriend and Father of their child, Travi$/Travis Scott.

Because Kylie Jenner has droves of fans who follow her on social media, buy her products, or otherwise adore her they apparently were eager to buy-up the issue of, "Playboy," with her featured as anything with Kylie Jenner involved (regardless how dressed or undressed) is going to be a big seller for all the men and women who are her big fans. This means that Kylie Jenner has made it really hard to me to buy a comic from Simon Hanselmann. I guess my next step to acquire this issue of, "Playboy," for a decent price is to actually go to a physical location that sells magazines and politely ask if they have the latest issue of, "Playboy," which is embarrassing--not because I care if people see me buying an adult magazine (I'm too sex-positive to care about that) but because the people selling me the magazine will probably think I want it due to being a fan of Kylie Jenner. That is mortifying as the only Jenner or Kardashian I can stand in the least is maybe Kourtney. Anyways, to summarize all this I can't buy a normally unpopular softcore nudie magazine with a comic I want to read due to Kylie Jenner. That is a sentence I did not expect to type this week.
Posted by David Charles Bitterbaum at 5:16 PM