"Reanimator Incorporated," Has a Fantastic First Chapter and Now Is Kickstarting the Second! 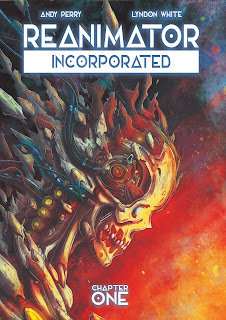 Andrew Perry is the writer of the comic, "Reanimator Incorporated," and reached out to me asking if I'd be interested in reading and reviewing the first chapter. He also supplied some preview pages for the second chapter which he told me would have a Kickstarter campaign. Drawing from the HP Lovecraft story, "Herbert West: Reanimator," but bringing its own unique vision and twists, I really enjoyed the first chapter and was excited by what I read in the second one!

"Reanimator Incorporated," takes place in a near-ish future where a large corporation is attempting to figure out how to bring the dead back to life but struggling to do so--much to the chagrin of shareholders. Herbert West and Dan Cain try to tweak the machine while West's home life is a wreck between an unhappy wife and son--Michael West--who feels ignored and desires help with his own projects. When the reanimation seems to start working but has some horrific results I had my attention quite captured! 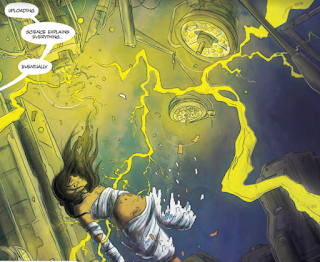 I've mentioned the writer as that is who reached out first, but I need to discuss Lyndon White, who provides the art and lettering. White does a fantastic job showing regular day-to-day life and then contrasting it with surreal and bizarre imagery when we see glimpses of weird spirit worlds and afterlives. It creates a great dichotomy. Things get even stranger in the second chapter I had a chance to see a preview of as we spend even more time in some Lovecraftian netherworlds while asking questions about if a body is reanimated what of the soul?

I give the first chapter of, "Reanimator Incorporated," 5 out of 5 stars and would encourage everyone to check out the Kickstarter that just started for chapter 2 (and which provides an opportunity to get both chapters). I had a lot of fun reading the first chapter and from what I've seen of the second things will only get even wilder!