"The Creep," is a Fantastic Republishing of Great Comics 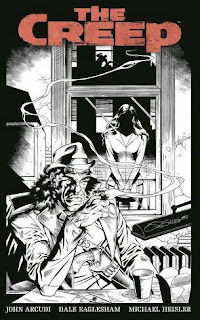 John Arcudi and Jonathan Case did a mini-series about a detective with Acromegaly named Oxel Karnhus back in the early 2010s. It was fantastic but actually was not the first appearance of the character. He appeared in a number of shorter stories within, "Dark Horse Presents," years earlier that have long been out of print. Done with Dale Eaglesham and Brian Kalin O'Connell, these tales told interesting yarns about Karnhus. Now being republished by Image in the form of a snazzy trade paperback, this collection of, "The Creep," has remastered artwork, tweaked dialogue, and is a superb read.

The first mystery about a woman looking for her birth mother had some twists that actually shocked me and the more straightforward tales were entertaining as well. The artwork by Eaglesham and O'Connell is just gorgeous with Eaglesham's pencils emphasizing how imposing Oxel can look yet also how vulnerable and sensitive he is too. I wonder if maybe we could get new stories with, "The Creep," sometime in the future if these classic chronicles are coming back out now. One can hope!