I Got My 2022 Overstreet Comic Book Price Guide! 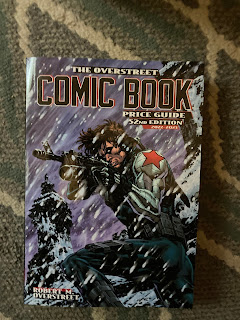 I know some folks don't trust it due to how fast the comic market fluctuates, but I have a soft spot for the Overstreet Comic Book Price Guide. The 52nd edition has been released, covering the year 2022-2023. It has great articles from retailers about how sales were in the last year, spotlights various creators, contains fun ads for multiple stores, and is a handy reference. I find the Overstreet Comic Book Price Guide is quite useful for older comics that aren't necessarily sold that often on eBay, thereby lacking much of an immediate sales history there or on sites like Covrprice.

It is true if something gets optioned or has big news break the price a comic featuring that character can suddenly be worth a lot more (or less if an option falls though). Still, I like being able to hold a weighty book in my hands that catalogs almost any comic published (besides really small-press stuff from Kickstarter or such). I may use Key Collector or Covrprice for immediate news, but Overstreet's book is something I have a special fondness towards.

Speaking of apps like Key Collector, it was interesting to see announced how Overstreet actually has their own site and app that has launched aiming at taking on Key Collector. Called, "Overstreet Access," I have not yet tried it out, but maybe should. If I like their book the app must be of use, I'd imagine. I'll let you all know if I give it a download.