"Batman," #125 Kicks off the Zdarsky and Jiménez Run With a Jolt of Energy 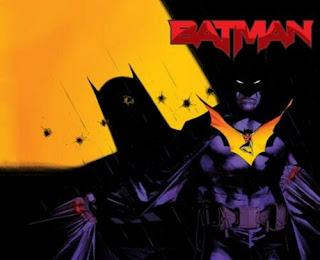 With issue #125 we have a new creative team on, "Batman," and I'm eager for more! Writer Chip Zdarsky is the only person I know of who has ever been scripting a Daredevil and Batman comic at the same time (some folks have tackled each at different points in their career). Jorge Jiménez is a fantastic artist and has partnered with Zdarsky for this new era of Batman, and they give us something pretty cool. Oswald Cobblepot AKA the Penguin is killing off anyone who is rich and refuses to donate their money, which puts Bruce Wayne and other people in his sights. Plus, Bruce is having nightmares--something that rarely occurs.

Throughout the issue we have some new mysteries arise (something called, "Failsafe," activates), a villain's death I shan't spoil that actually surprised me a little (I don't know how long it will stick, but it did manage to shock a bit), and callbacks to past trauma's Batman has faced as new ones occur. It's the first issue of Zdarsky and Jiménez's run so they have to quickly and carefully lay out a bunch of stuff to build upon, but they're both pros and excel at doing so. The story has my attention and the art is gorgeous beyond belief (a rain-slicked Batman is always an impressively illustrated Batman). I'm a fan of both creators and if this first issue of their run is any indication we should be in for a great time while they're doing, "Batman." 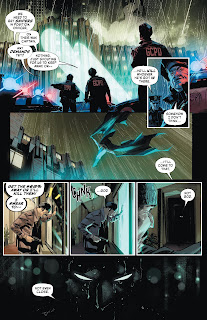 I would be remiss if I didn't mention the back-up story in this issue that is also written by Zdarsky but features the artistic talents of Belén Ortega. It focuses on Catwoman as she deals with the social and financial fallout of the aforementioned villain who died. It ties together with the main story nicely while doing its own thing and zipping along delightfully with a bit more humor than the main Batman story. Should you be a fan of Batman you'll find the main and back-up story both great at scratching your fandom-itch and if you're a new/newer reader to the character you can follow along quite easily too. I'd say this is a fantastic...

Posted by David Charles Bitterbaum at 9:35 AM