The First Two Issues of, "Justice Warriors," Are Satirical Gold 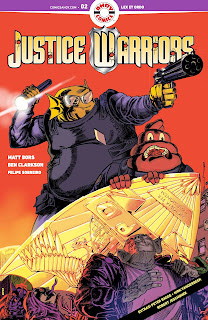 Back In February, it was announced how Matt Bors and Ben Clarkson were teaming up for a satirical sci-fi comic focused on the police of a sci-fi World. There is a bubble and it is full of rich people and safe. Everything outside the bubble is basically a barely policed and barely cared-for place of mayhem. The series follows Swamp Cop and his new partner, Officer Schitt (who has a piece of poop for his head) as they try to keep the peace, and mostly fail at it. In these two first issues we see record buyback plans that sound Ponzi-scheme-ish result in riots, people treating bread like a currency leading to even more craziness, and all the meanwhile a quite rebellion seems to be forming among the citizens most horribly impacted by this dystopia. It sounds a bit dreary, but this comic is hilarious. It is one big piece of parody that is not anti-cop by any means but clearly mocking those who think of the police as an infallible force.

"Justice Warriors," is an absolute hoot in its clever commentary on society presented through a slightly askew and twisted lens. You can buy the first issue as all finer comic shops now and the second one will be in shops on Wednesday, July 13th. If you like a good mix of smart and gross humor (most of us do) then you'll appreciate this series immensely.

Note: An advance digital copy of the second issue of, "Justice Warriors," was provided to me for the purposes of review.