"Irredeemable," and its Tie-ins are Getting Republished With Special Editions! Through Kickstarter, For Some Reason 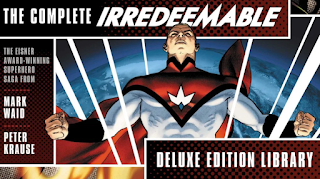 Update: As I suspected might be confirmed, the series will be back in 2023. That could be cool!

In news that had me equally intrigued and confused, BOOM! Studios is republishing the fantastic comic series, "Irredeemable," as well as its spin-off, "Incorruptible," and the spiritual sequel to the duo of comics, "Insufferable." This is cool, yet it is strange how they are doing it. You see, I don't get why they are using Kickstarter to fund these reprintings seeing as BOOM! is a big publisher and Kickstarter is...well, not really meant for that. It is an excellent site for indie creators and smaller publishers, but BOOM! is pretty sizable, so I'm a bit befuddled.

I like BOOM! as they were one of the first larger publishers to add me to their press list as my blog grew in size back in the day, but just because I like someone doesn't mean they are above me asking questions. So yes, I see that the Kickstarter campaign has fun levels and rewards, but I still ask, why Kickstarter? I mean, if this eventually leads to new comics that could be cool (although considering the way, "Irredeemable," ended I'm not sure how they would even do that), but I'm still just a bit confused. It's already made a ton of money in less than a day of existing, however, so what do I know, anyway?