The Trailer for, "Hawkeye," Has Been Released and You Know I've Got Thoughts 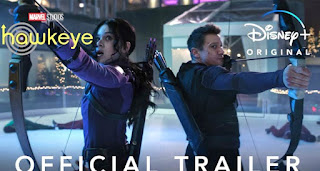 I previously said how I was excited for the new, "Hawkeye," show because the supporting cast looked amazing--e.g. I was excited for everyone but Hawkeye himself (sorry, Jeremy Renner). I like Renner, he just has been kind of wasted as Hawkeye, and this trailer seems to indicate that yeah, Hailee Steinfeld is going to steal the show as her version of Hawkeye. That isn't surprising as Steinfeld is super-talented, but man, she really carries this trailer. Give it a watch below:

I was intrigued by this promo for the show as it starts off kind of dramatically, but then it develops a quirky tone a lot like the Matt Fraction and David Aja run--it even has the tracksuit mobsters from that arc. I really hope Fraction and Aja are getting some royalties for how much this show seems to be cribbing from them. We also get a blink-and-you'll-miss-it appearance of Echo (Alaqua Cox) as well as Lucky the Pizza Dog. In addition, there is a snippet of a Steve Rogers-themed Broadway musical which sounds ingenious (and a bit like Marvel doing a self-own on their failed Spider-Man play).

Everything looks promising with nothing screaming, "This is gonna suck!" as opposed to, "This will be a good time!" I had some trepidation about the show due to how Hawkeye in the Marvel Cinematic Universe has just been dull, but this trailer helped assuage some concerns. Now, I quite look forward to, "Hawkeye," debuting on Disney+ this November 24th.