"Snelson: Comedy is Dying," #1 and #2 Offer a Creative Examination of the Art of Stand-Up Comedy 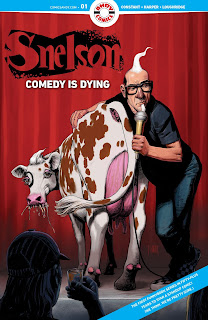 Comedy is hard. Professional comedians will tell you this. Hell, I used to do stand-up comedy at open mic nights and the number of times I bombed well outnumber the times I killed, so I'll tell you comedy is hard. In the past number of years, there has been the added element that people have found some comedy not so much funny as just offensive and unpleasant--or the comedians who tell the jokes have sometimes been revealed to be quite unpleasant people in their private lives or outright monsters. This had led to cries of, "Cancel culture," and complaints that comedians are getting, "Canceled," by overly-sensitive and, "Woke," mobs that can't take a joke. All of these concepts coalesce in the first two issues of, "Snelson: Comedy is Dying," in a thoughtful and quite entertaining manner.

In this new mini-series published by Ahoy Comics, Melville Snelson is a minimally successful stand-up comic. He is nowhere near the career-heights he achieved in the '90s when he had a massive following and almost got a sitcom. He blames people for being too sensitive but the real problem might be some of his stuff just isn't funny. The first issue is mostly set up for a much more interesting second issue where after getting some medical news Snelson turns into a crusader against, "Cancel culture," thanks to his new podcast that allows him to rail against how people won't let comedians say what they want to say for fear of repercussions. This attracts some reprehensible people to Snelson's platform but he's finally getting attention again so he doesn't really care. 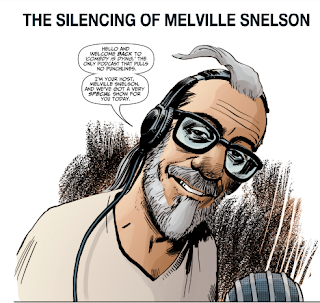 "Snelson: Comedy is Dying," amazingly manages to not make Snelson an outright villain. Paul Constant writes him extremely well. He is more a figure of pity for readers. He's washed-up, desperate for viewers/listeners, and figures if he falls into the mold of being an alt-right celeb against, "Woke," culture at least he can be infamous if he's not famous. Those who favor, "Free speech no matter what," do have their argument presented in the form of some characters, but the ones who point out how, "Cancel culture," just isn't necessarily a true thing come off a lot more reasonably and realistically.

I've not touched much yet upon Fred Harper's artwork and I apologize for that as it is utterly fantastic. For a comic where much of the time has characters standing on a stage or sitting behind a microphone in a living room, Harper kills it. He adds these hilarious little abstract touches to moments that really sell the absurdity of what we're reading, such as when Snelson realizes his latest podcast episode's big guest has canceled but he just keeps smiling bigger and bigger in a surrealist manner lest someone reporting on his podcast see how bad things are getting while Snelson whispers to his producer about how they're screwed. 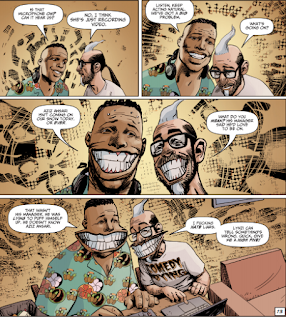 I found the first two issue of, "Snelson: Comedy is Dying," to be great reads thanks to Paul Constant's careful navigating of choppy political waters while at the same time being funny as well as Fred Harper's amazing art. The first issue is a bit slow to get things moving but by this second issue all the cylinders are firing. Check it out, I'd say.