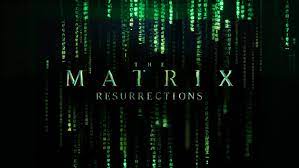 I adored the first, "Matrix," movie. Directed by Lana and Lilly Wachowski, it was a mind-bending experience full of philosophy, kung-fu, wild special effects, and it was just a delight. The two sequels were alright but admittedly let me way down compared to the first flick. Looking at everything now with some distance they hold up fine, but that first movie is still the best of the three by far. Now here we are almost two decades later and a new, "Matrix," movie is on the way. Titled, "The Matrix Resurrections," this one is directed solely by Lana with her as a writer of the script along with Aleksandar Hemon and author David Mitchell (of, "Cloud Atlas," fame, for better or worse). Here's the trailer:

The trailer actually looks pretty good and makes me wonder if this new entry could be a damn good flick. It looks like Neo (although now he doesn't even know he's Neo) is in our new modern era, possibly being monitored and kept relatively sedated (perhaps he didn't truly die at the end of the last flick and is trapped in a new Matrix). Keanu Reeves has had a career renaissance as of late and it's fun to see him return as Neo as you couldn't callback to a more classic role Reeves has played besides if you did another, "Bill and Ted," movie...which I recall now they actually did. Carrie-Ann Moss is back, Laurence Fishburne isn't but a man who looks and acts suspiciously like him is, and we get a healthy dose of Neal Patrick Harris in the preview, and I always enjoy some NPH in my flicks.

It isn't all moody talking and atmosphere, however, there is plenty of kicking, jumping, and slow-mo guns that are this franchise's hallmark. In some ways, "The Matrix," feels even more relevant with its concept of humanity becoming trapped in our own technology--a point that is driven home in a clip during the trailer where Reeve enters an elevator and everyone is obsessing over their phones and tablets. That may very well help, "The Matrix Ressurctions," be deliciously topical as well as packed full of exciting action scenes. Come December 22nd anyone who wants to go to a theater or watch it on HBO Max will be able to judge for themselves if this is all empty hype that is going to be more like the deflated sequels or a new entry that will hit as hard as the first movie. All I know is this preview got me a lot more intrigued than I had been.